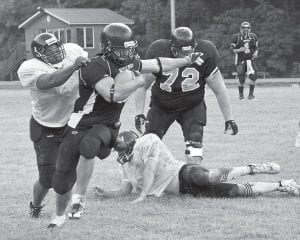 Wolves running back Matt Maggard broke a pair of tackles on this rushing attempt to gain the first down in the 6-0 win over Pike County. He was aided by teammate Corey Harris, at right. (By Chris Anderson)

The Letcher County Wolves are the owners of a 2-1 record after defeating the Pike County Knights 6-0 on the road last Saturday.

The game took an ugly turn late in the matchup when a brawl broke out with just over a minute to play in the fourth quarter.

The game was a defensive battle throughout, as the both offenses squandered numerous opportunities to score, frustrating both teams and aggravating bad blood that already existed between the two squads.

After a scoreless first half, Letcher County’s off ense was still in Stasis Lock and failed to convert a first-and-goal opportunity, one of four on the night they squandered. However, the defense, strong all night, came up with a huge fumble recovery deep in Pike County territory and allowed the off ense one more chance to punch the ball through.

Team leader Trevor Buttrey powered through the tough Knights defense with a short rushing effort to put the first points on the board with just over a minute left in the third quarter, scoring what ended up being the winning touchdown.

Late in the fourth quarter, the Wolves once again let a first-andgoal opportunity slip away and surrendered the ball on downs to Pike County, who answered with two quick first down rushing attempts.

The Knights looked to have the momentum to score on the drive, but when Wolves defender Durrell O’Linger tackled the Knights’ ball rusher out of bounds on the Pike County sideline with 1:16 left to play in the game, another Pike County player returned the tackle to O’Linger, sparking a brawl between the two teams.

Pike County players joined in the melee and a number of Letcher County players crossed the field to join in. Coaches, players and officials managed to briefly restore order, but spectators began to abandon the bleachers and join in on the confrontation and another fight broke out between players at midfield. The arrival of five Pikeville Police Department units to the field broke up the second confrontation and officials declared the game over.

Wolves assistant coach Randy Johnson said a preseason meeting between the two teams had to be called early because of the threat of violence.

No charges were filed and no injuries were reported as a result of the fight, but at least one Pike County player left the field with minor cuts and bleeding.

The two teams, both in their first year of play in the Alliance Football League, are scheduled to face each other again at the Wolves’ home field at Fleming- Neon on July 17.