Woman, 30, indicted in death of boyfriend 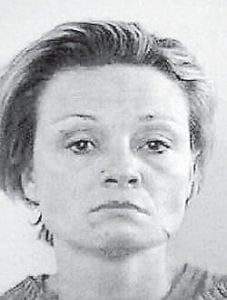 This photo of Sharon Collins was taken shortly after her arrest in Lexington. She told authorities that some of the injuries to her face were caused by David Hogg assaulting her with a key.

A Letcher County woman was indicted in Lexington last week on a charge of second-degree manslaughter in connection with the death of a 36-year-old Pine Creek man.

Sharon Collins, 30, was originally charged with murder in the death of David B. Hogg, with whom she had lived with for several months.

The Lexington Herald-Leader reported that Collins testified before a Fayette County Grand Jury on November 20.

The attorney for Collins, Russell Baldani of Lexington, told the Herald Leader that Hogg had a history of abusing Collins and other women, and had sent Collins to the hospital before. Hogg scratched Collins in the face with a key the night before the stabbing while the couple were visiting Lexington, Baldani told the newspaper.

The stabbing occurred in the early morning hours of September 16. Collins told authorities she was at the Rosebud bar downtown while Hogg and an acquaintance were breaking into cars to steal radios, her attorney said.

Baldani told the Herald- Leader the couple got into a fight later while in their car. He said that when Hogg slammed on the brakes, Collins hit her head on the windshield and got out of the car. Baldoni said Hogg was trying to drag Collins back to the car – giving her road rash – and was on top of her when she stabbed him with a pocketknife, hitting him in the aorta, the Herald Leader reported.

Neither knew how serious the stab wound was, Baldani said.

Collins originally told police that she found Hogg dead next to their black Ford Taurus after she left the Rosebud bar. She later told police she stabbed Hogg in self-defense.

According to the Herald- Leader, the only witness to the stabbing, Gregory Barnes, was recently arrested and is in the Bourbon County jail. Barnes, an acquaintance, was sitting in the car at the time of the incident.

A search warrant affidavit obtained by the Herald-Leader says that Collins dropped Hogg’s body off at Samaritan Hospital in Lexington at 6:15 a.m. Hospital employees estimated that he’d been dead for an hour.

Collins faces five to 10 years in prison if convicted on the lesser charge of manslaughter. She had been facing 20 years to life on the murder charges.

Collins is scheduled to be arraigned on the charged contained in the indictment tomorrow (November 29). She is being held in the Fayette County Detention Center on a $500,000 bond.