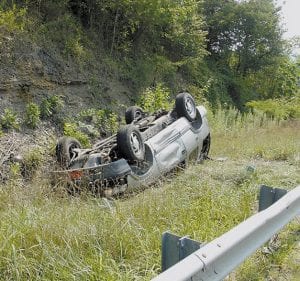 Devade Williams, 52, of Hindman was injured when the Chevrolet Blazer she was driving rolled over four times Monday on the Whitesburg bypass. Williams was airlifted to Kingsport, Tenn., where she was listed in fair condition.

A Hindman woman was airlifted to a Kingsport, Tenn., hospital for treatment of injuries she suffered Monday morning in a one-vehicle accident on the Whitesburg bypass.

Devade Williams, 52, was transported by helicopter to the Holston Valley Medical Center after the sport-utility vehicle she was driving flipped four times across two lanes of traffic and a guardrail near the old Whitesburg High School.

Williams was being treated in Holston Valley’s Level One Trauma Center, a spokesperson Wellmont Health System said. Her condition was listed as fair.

Whitesburg City Police say Williams was traveling south on the bypass (KY 15) when she lost control of her Chevrolet Blazer after the brakes locked while she was trying to stop the vehicle at a traffic light at the exit to Main Street.

Police Chief Scott Adams said the Blazer was traveling in the inside lane next to the median when the brakes locked and caused the vehicle to flip.