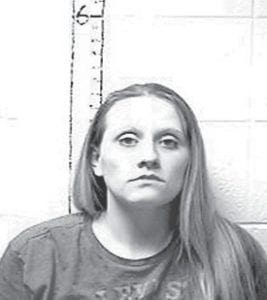 A Roxana woman was arrested and charged in connection with the theft of money from a Whitesburg business.

Nora Lynn Hatton, 27, of Highway 2036, was charged with thirddegree burglary and theft by unlawful taking after surrendering to authorities.

Jolinda Wright, owner of Raegan’s Closet, left her store unattended for about five minutes around noon on November 30 to get lunch from StreetSide Grill and Bar, which is owned and operated by her son and located above her store on Main Street. When Wright was on her way back downstairs to her store she met a woman who was walking up the staircase “acting very nervous,” said Whitesburg Police Captain Chuck Bledsoe.

The woman gave Wright a flyer and told her she was collecting donations for the Linefork Community Center.

“She gave her a false name and false phone number,” said Bledsoe. “When Jolinda checked her register, money was missing.”

Other Whitesburg businesses had given the woman donations and Bledsoe was able to identify the suspect as Hatton.

“I think it was more of a crime of opportunity,” said Bledsoe.

Hatton had been released from house arrest in connection with another crime on November 28. She turned herself into police at 5:30 p.m. on November 30 and remains in the Letcher County Jail. Bond is set at $100,000 cash with home incarceration.

Hatton is scheduled to appear at a preliminary hearing on December 13 in Letcher District Court at 1 p.m.