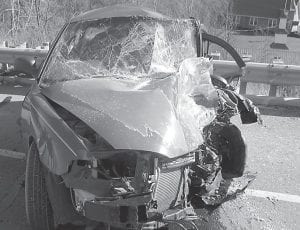 Amy Bowling was driving this Pontiac Sunfire when it crossed a double yellow line on U.S. 119 and struck another vehicle. (Photo courtesy to Mountain Eagle)

A 34-year-old Jackhorn woman is listed in critical condition in a Tennessee trauma center after she received life-threatening injuries in a car wreck at Mayking Tuesday afternoon.

Amy R. Bowling was airlifted to the Holston Valley Medical Center in Kingsport after her 1997 Hyundai collided with a 2011 Toyota Camry. Bowling was traveling north on U.S. 119 around 12:52 p.m. on Dec. 17 when she crossed the double yellow line and hit the Camry being driven by Tonetta McCoy, 35, of Pike County.

Lt. Brian Damron of the Letcher County Sheriff ’s Department said Bowling might have been driving under the influence of drugs or alcohol at the time of the collision. However, he said authorities here are awaiting the results of a test of Bowling’s blood ordered by Kingsport police upon the request of the sheriff ’s department.

Damron said the safety features in McCoy’s car in addition to her wearing a seat belt played a crucial role in McCoy receiving only minor injuries. McCoy was treated at Whitesburg Appalachian Regional Hospital and released.

“Mayking, Neon and Whitesburg fire departments showed exceptional professionalism in their quick response and actions on the scene which enabled the rapid extrication of Bowling (and) allowed her to be relayed to the Wings Air Rescue helicopter that landed beside the Mayking Fire Department on U.S. 119,” said Damron.

Damron is being assisted in the investigation of the wreck by Kentucky State Police Troopers Donnie White and Jason Bates.