‘They’re not concerned at all about people,’ judge says of black bears 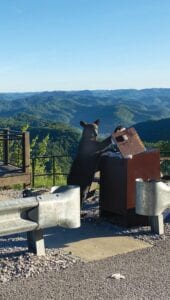 The story behind the bear photo This photo of a young black bear foraging for food in a garbage can on Pine Mountain was taken by Whitesburg resident Shannon Trent, who tells about the encounter in story at left. (Photo courtesy Shannon Trent)

In the cartoons, Yogi was smarter than the average bear. A picture taken by a Whitesburg woman shows he has a protégé on Pine Mountain.

“I go across the mountain to work every day — I’m the lunchroom manager at Arlie Boggs Elementary — and he was just standing there,” said Shannon Trent, who snapped the picture of Letcher County’s very own Yogi standing on his hind legs, holding the lid of a bear-proof garbage can open with one paw while foraging for food in the can with the other.

“I cracked my window a little bit and took it,” Trent said.

As it turns out, the garbage hadn’t been picked up over the weekend, and with many people still avoiding restaurants because of the coronavirus, the can apparently was overfull and wouldn’t latch completely. The bear was able to lift up the lid without reaching the recessed latch, but it still makes a meme-worthy picture. Not only did Yogi hit the trashcan at the Hogg Overlook, either he or Booboo also got the cans at two more overlooks. By Saturday morning, garbage was strewn all over the roadside picnic areas. 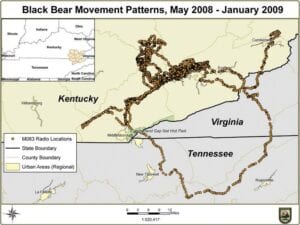 County Judge/Executive Terry Adams said he went to the site Monday morning when he was told about the mess.

“When I got there, that bear was there and he wouldn’t leave,” Adams said. “I walked up probably to within 20 feet of him.”

Adams’s cell phone video shows the bear standing casually behind a steel handrail beside the overlook, ignoring Adams yelling at him to go.

“They’re not concerned at all about people,” Adams said.

He said the county employee who normally picks up the trash at the overlooks had the weekend off and was out of town.

“We didn’t get that trash emptied out and those containers, where everybody had been going up there for lunch, the lids wouldn’t latch down,” Adams said. “We’re going to try and do a better job of getting that picked up. I’m to blame.”

Both Adams and Trent said they see bears along the road almost every time they cross the mountain. Not surprising, said Triston Curry, a bear biologist with the Kentucky Department of Fish and Wildlife Resources who lives on the Cumberland River side of Letcher County.

“You can encounter a bear anywhere in eastern Kentucky. We’ve got a stable population, we’ve got a healthy population,” Curry said, noting that there are a lot of bears on Pine Mountain.

He said as far as he knows there are not many problems with people feeding beers on the mountain, but even with plentiful food, the trash cans and smell of food are an attractant.

“This time of year the natural food sources are becoming more available, but bears are opportunistic feeders,” he said.

Mother bears are also separating from their yearling cubs about this time of year, and breeding season is beginning. The cubs average about 50 pounds, and roam great distances to claim their own territories to live and find food.

“Be vigilant wherever you are in Letcher County,” Curry said. If you are having a picnic and see a bear approaching, “the best thing to do would be to gather up whatever you’re eating and get back in your vehicle and put some distance between you.”

If bears smell food, Curry said, they follow their nose and don’t pay much attention to their other senses. He said if a bear approaches, wave your arms over your head and yell or make other loud noises to get its attention, and back away slowly. Sometimes the bear might not even realize you’re there if it is on a single-minded hunt for food, but loud vocal noises usually get their attention. Bears themselves make vocal noises, and they might be telling you you’re too close to them.

“ Vocalization from a bear is good, and there’s a vast array of vocalizations they use in communicating with each other,” he said.

He advised people who are going to be outdoors to carry bear spray, and be aware of their surroundings. Fish and Wildlife recommends staying 100 yards away from bears.

He also suggested visiting www.bearwise.org, an Internet site put together by all of the Fish and Wildlife agencies in the southeastern United States that includes the “best practices” for living in bear country.

One of the best is the same advice Ranger Smith gave visitors to Jellystone Park in the Yogi cartoons: Don’t feed the bears.