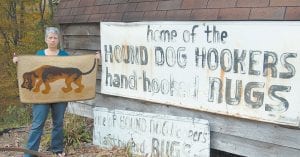 Mary Gail Adams holds a hand-hooked rug her late mother, Josephine Whitaker, made more than 40 years ago at their Blackey residence. Mrs. Whitaker was a member of the Hound Dog Hookers which formed during the 1960’s. Adams had been wanting to find one of her mother’s rugs but had been unsuccessful until an antique dealer located a hand-hooked rug in Indiana and contacted her to learn the history behind the rug.

A piece of Mary Gail Adams’s childhood came back to her this week in the form of a hand-hooked rug her late mother crafted more than 40 years ago.

A woman who works in an antique store in Cincinnati recently found the hooked rug with the image of a brown hound dog sewn in it at an antique mall in Columbus, Indiana. The name of Adams’s mother was written on the back of the rug on a stamped label which had carried the imprint of a hound dog and the words “Hound Dog Hookers” and “Blackey, Kentucky.” The woman was curious about the rug and called the Blackey Library last week to learn about the history of the piece of art. 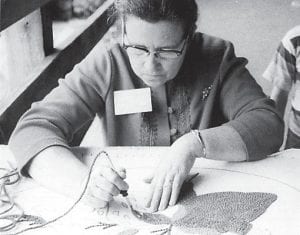 “It is perfect,” said Adams. “It has been taken such good care of. I would have paid anything for it. I was so excited.”

Adams cried for an hour after she opened the package.

Adams’s late mother, Josephine Whitaker, began making hooked rugs in the 1960s with a few other women who called themselves the Hound Dog Hookers. Adams recalls that the group was formed as part of President Lyndon Johnson’s War on Poverty program, but doesn’t remember how the group got its name.

Adams said Mary Anne Adams and Irene Kincer may have been the first women in Letcher County to sew with the group. She said Irene Dixon, Alicene Fields and Mrs. Whitaker stuck with the program for more than a decade and made the majority of the rugs.

Mrs. Whitaker, who received a percentage of the sales from the hooked rugs, began making rugs after her husband, Kirby, was laid off from his job as a coal miner. Adams was the youngest of five children and was a small child when Whitaker began making rugs.

Adams said her mother was strong willed and was a “one-woman army.”

“My mom was the most independent, self-reliant person I knew,” she said.

A New Yorker named George Wells taught Mrs. Whitaker and others how to make the rugs as well as market them throughout the United States.

“George Wells had a contest to draw a hound dog,” said Adams. “She (Mrs. Whitaker) stopped at the local grocery store to get a sheet of freezer paper to draw the hound dog. The legs are short because the freezer paper wasn’t long enough.”

Adams lives in the house she grew up in at Blackey and remembers when Mason jars filled with dyes covered the tables in her kitchen. Wooden frames were held up by saw horses and skeins of wool were scattered throughout the living room.

The wool came in only one color, a neutral beige, and Mrs. Whitaker used dye to make the many diff erent colors.

“She would dye each and every color herself with Rit dye,” said Adams. “She would write down the recipes so she would get the same color each time.”

“She had these big wooden frames,” Adams continued. “Then she would take it off the frames and clip the loose threads. She would hem it, lay it on the table, cover it with liquid Latex and spread it with a butter knife and let it dry.”

The label was attached last.

“It was an old, white sheet that she would stamp,” said Adams.

Mrs. Whitaker made several rugs featuring cardinals, quail, foxes and hound dogs. Adams said her mother could finish a rug in about four or five days.

“She would work awhile and then get up and go do something else and then work awhile more,” said Adams. “In between all of this she raised me and kept a garden. She canned. She kept house. She never stopped.”

Adams has hung on to memorabilia from the rugmaking days, including the Hound Dog Hookers stamp, the stamp pad, a scrapbook with newspaper clippings about her mother and sketches her mother drew.

President Johnson bought the largest rug the women ever made. Adams said it was decorated with foxes, birds, flowers, leaves and wildflowers.

“It was the biggest one and the most expensive one they ever made and sold,” said Adams.

She thinks it was sold for about $500. Adams said the rug is in a museum in Texas. She said she and her sisters would like to see it someday.

“That would be a dream come true to me,” said Adams.

A rug with an American eagle in the center was made for Lady Bird Johnson. Adams said either a former University of Kentucky coach or athletic director requested a rug made with a wildcat on it that Adams thinks was displayed for awhile in Wildcat Lodge, the residence hall for the UK basketball team.

Adams said in the early 1980s she was visiting Fort Boonesborough and found one of the hooked rugs on display there.

“We flipped it over and there was mom’s name,” she said.

Unfortunately, that rug was not for sale.

A rug with quails sewn in it that her mother made years ago hangs over the living room couch in the home at Blackey. That was her mother’s favorite piece and the only rug Adams had until yesterday.

If anyone has a hooked rug made by Mrs. Whitaker, Adams asks that they email her at cassmara4@hotmail.com.