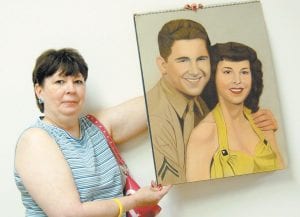 Patricia Holbrook holds a painting of a young couple she believes to be from the 1940s or 1950s. (Eagle photo)

Patricia Holbrook, of Mayking, wants to know the history behind a painting her late mother created in 1988.

Holbrook recently found the artwork in an old sketchpad while she was going through some of her mother’s belongings. Her mother, Flo Holbrook Mayhew, died June 6 at the age of 75.

“I just had never seen it,” said Holbrook. “I just think I would remember something so beautiful.”

Holbrook said she knows it is a completed piece because her mother always signed and dated her work when she was finished.

Holbrook is planning on framing the art piece and has no intentions of parting with it.

“We want to keep it but we want to know who it is and the family background,” said Holbrook. “We just want to solve the mystery.”