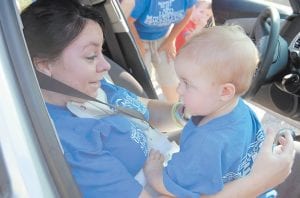 More than 60 friends and family members of Michelle Tilley waited at a truck pull off near the Kentucky/Virginia border on August 28 to surprise Mrs. Tilley on her way home from a rehabilitation facility in Atlanta, Ga. A tree fell on Mrs. Tilley, 41, on July 10 while she was vacationing at Cades Cove, a valley in the Great Smoky Mountains National Park. Mrs. Tilley, an aide in the structured classroom for autistic students at West Whitesburg Elementary School, was treated at the University of Tennessee Trauma Center before being transported to the Shepherd Center in Atlanta July 22. In photo above, Mrs. Tilley greets 16-month-old daughter Kylee. 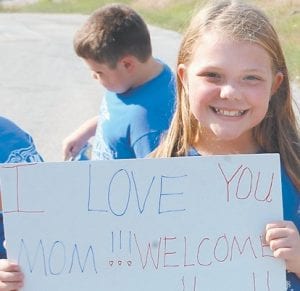 Above, Mrs. Tilley’s nine-year-old daughter Kaleigh was eager to have her mom home. Below, a portion of the large crowd that greeted Mrs. Tilley at the state line. 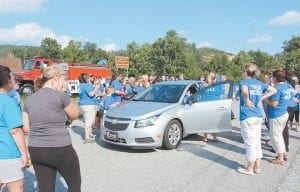