Pictured above is one of the three counterfeit money orders.

A Blackey woman received counterfeit money orders after she placed a classified ad on the Internet.

Pauline Collins never suspected that her advertisement for rat terrier puppies on Craigslist and Petfinder.com would attract a scam artist.

Collins received three money orders each in the amount of $920. The person named Anderson Moller told Collins in an email to cash the $2,760. Moller then instructed her to take out the cost for two female puppies and shipping fees and to mail back the change. Moller said the puppies would be shipped to the United Kingdom.

“Do let me know as soon as you receive the payment so as to give you the shipper’s information, you will send the balance via Western Union money transfer,” wrote Moller in an email sent to Collins on April 24.

Then on April 29 Moller sent Collins another email telling her that someone would come and pick up the puppies at her home in Blackey.

“I just want to tell you to ignore the shipping because I have a shipper that will come for the shipment,” wrote Moller. ” OK, this (is) just what you are to do. Deduct the money for the puppy and send the balance to the shipper via Western Union money transfer for him to be able to come pick the puppy up at your place.” 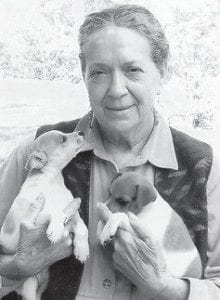 Blackey resident Pauline Collins was recently photographed with two rat terrier puppies that she was going to ship to the United Kingdom. She was asked to cash three money orders totaling $2,760 and mail the sender of the money orders the change. Collins became suspicious of the money orders and found out they were counterfeit. She has since sold the puppies to a couple in Ashland.

Collins became suspicious when she noticed the money orders were dated January 16, 2008. The puppies were born March 10.

Christon told Collins that all the person wanted was the change from the money order.

Collins doesn’t like to think about what would have happened to the puppies if she had shipped them overseas.

“The thought of it is unnerving,” said Collins. “Those poor little puppies would have starved to death.”

Collins sold the two puppies to a couple from Ashland that drove to Blackey and picked them up.

A man from Jenkins bought two puppies and Collins has one puppy left to sell.

Collins is now hesitant to sell her puppies on the Internet.

Collins has placed an ad in the classified section of The Mountain Eagle to try to sell the last puppy.

“That kind of stuff happens to other people, but it was the first time it happened to me,” said Collins.