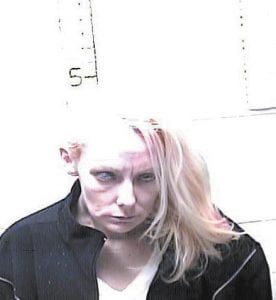 Samantha Collins is seen in this jail booking photo taken in March.

A Mayking woman charged in connection with a case that resulted in the single largest seizure of the highly addictive drug crystal methamphetamine in Letcher County has been sentenced to 10 years in prison.

Collins, who was arrested March 12 during a raid on her father’s home by the Letcher County Sheriff ’s Office, was also sentenced to five years in prison for use/investment of drugrelated income, five years in prison for first-degree wanton endangerment of a child under 16, and 365 days in the Letcher County Jail for use/possession of drug paraphernalia.

Craft also sentenced Collins to three five-year prison sentences on three separate charges of possession of a handgun by a convicted felon. All sentences are to be served concurrently.

The sentences were handed down by Craft during an August 22 hearing. Collins entered a guilty plea on July 18. She will be credited with the time she has served in the county jail since her arrest.

Collins is the daughter of 62-year-old Danny Robert “Danny Bob” Collins, whose home was raided March 12 by the Sheriff ’s Department, with assistance from a K-9 unit from the Pike County Sheriff ’s Department. In searching the house, deputies found multiple bags of crystal meth, heroin, guns and cash locked in a gun safe and another safe in the doublewide mobile home.

Letcher County Sheriff Danny Webb said the raid turned up $180,000 worth of crystal meth, which he said was the largest such finding he remembers in the area. The arrests of Collins and her father were the result of a six-month investigation by Sgt. Alicia Congleton and Deputy Sidney Fields.

Captain Barry Engle said in addition to nearly four pounds of meth, deputies seized 10 grams of brown heroin with an estimated street value of $3,500, about $5,000 in cash, much of it in $100 bills, four handguns and assorted drug paraphernalia.

The drugs found at the house were a pure type of methamphetamine known as ice, not the typical meth made in plastic soft-drink bottles. Police officers believe it may have been made in Mexico and smuggled into the United States.

Danny Collins is scheduled to appear in Letcher Circuit Court for a pretrial conference on September 5 at 9 a.m.