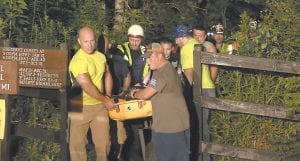 Volunteers and first responders carried 22-year-old Kara Kennedy of Wise, Va., off the trailhead at Bad Branch Falls Nature Preserve in Eolia. Kennedy fell from near the top of Bad Branch Falls on July 13 while hiking with her boyfriend. Kennedy was critically injured and has been treated at Pikeville Medical Center since her fall. The accident resulted in her losing the lower part of her right leg. (Screen shot courtesy EKB)

A 22-year-old Virginia woman who fell at Bad Branch Falls Nature Preserve a week ago continues to recover at the Pikeville hospital.

Kara Kennedy, of Wise County, underwent the amputation of a lower leg and facial surgery after falling nearly 70 feet on July 13. Kennedy and two companions had climbed to the top of the falls when she slipped on wet rocks.

Signs at the falls warn hikers not to attempt the climb.

A man hiking with Kennedy ran barefoot 1.2 miles to the nearest residence to call for help.

The 9-1-1 call was placed at 7:13 p.m. and rescuers carried Kennedy out of the rough terrain by 10:30 p.m. She was transported by a Neon ambulance to a landing zone on Pine Mountain, where Wings Air Rescue picked her up and flew her to Pikeville Medical Center. 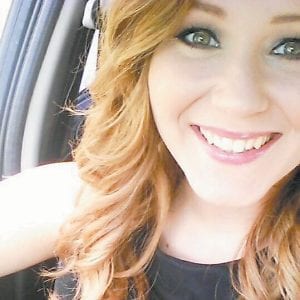 Kara Kennedy is seen in this photo from social media site Facebook.

A community prayer gathering is scheduled for 9 a.m. on July 23 at The Glades, a park in downtown Wise, Va.