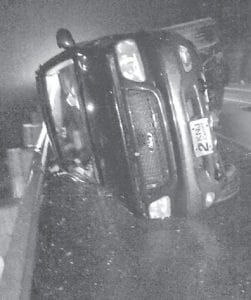 A teenager and three of his friends were riding in this pickup truck on KY 15 at Van when they were forced off the road by a man driving under the influence of drugs. The driver of the PT Cruiser that hit the truck had been charged with similar crimes at least four times before.

How would you feel if this happened to you?

On December 6, at approximately 9 p.m., this is what happened to my teenage grandson and three of his friends:

My grandson was taking his friends home after a night of playing video games and watching TV. They were heading toward Isom on Highway 15, about one mile below Action Auto when their nightmare began. This could have been anyone in our community.

My grandson noticed a car veering into his lane and started pulling onto the shoulder, close to the guardrail. The car kept to its path and hit them head-on.

The PT Cruiser that the other man was driving went under my grandson’s Ford F-150 pickup truck and caused it to turn onto its side. The pickup truck then skidded down the road more than 100 feet before it finally stopped.

If the guardrail had not been in place, the truck would have plummeted over a cliff and probably killed all four of those teenagers.

The man in the PT Cruiser was passed out when bystanders came to check on him. The four teenagers had to fight their way out of the truck, and it took both boys to push and hold up the truck door so they could get free from the truck. The truck my grandson was driving was totaled and the axle was knocked off.

When police and first responders arrived on the scene, the man in the other car remained passed out and did not wake up until after he had been at the hospital for some time. All four teenagers were transported to the hospital. They all suffered from minor injuries, by the grace of God, they were not hurt badly. It was only by God’s grace that they all survived this terrible accident.

This man has been been charged numerous times with driving under the influence of drugs or alcohol. He was involved in a fatal wreck in Knott County.

My question is this: How can our justice system keep letting these types of people out to wreak havoc on our community? Where is the justice for the honest, hardworking community members and their children? Why does the justice system seem to be so lenient on drug addicts? What do we need to do as a society to get lawmakers and law enforcers to hold these people accountable for their actions?

We need to put an end to this leniency before others can be harmed. We need to come together as a community and demand that we are protected and the drug addicts are punished for their crimes.

In my opinion drug addiction is not an illness; it is a choice.