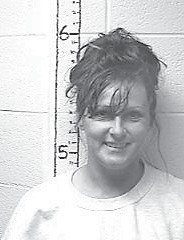 Letcher Circuit Judge Sam Wright followed a jury’s recommendation in sentencing a Jenkins woman to a 20-year prison term for stealing checks from a 92-year-old veteran.

Morris had helped her motherin law clean Hopkins’s home for about a year and a half. The crimes were committed in March, June, August, September, October, November, and December of 2012 and in January of 2013.

The jury recommended 10 years per possession and theft charge to run consecutively and one year on each of the misdemeanor charges to run concurrent with the felony charges.

The total number of years to spent in jail totaled 600 years, but 20 years is the maximum Morris can be sentenced for class D felony charges, according to Kentucky law. Morris must serve 20 percent of her sentence before being parole eligible.

Morris had previously pleaded guilty to taking $2,560 from Cato’s of Whitesburg. She created and submitted fictitious customer return slips for which she authorized cash refunds from August through December 2010 when she was manager of the store.

Mr. Hopkins served the U.S. during World War II, the Korean War, and the Vietnam War. During his tenure as a Marine, Mr. Hopkins escorted Joe DiMaggio, a Hall of Fame centerfielder for the New York Yankees who died in 1999, during a visit to a base where Mr.

During an inaugural ball for President Franklin D. Roosevelt, Mr. Hopkins danced with Betty Grable, an American actress, singer and dancer who died in 1973.

“Mr. Hopkins has had a very interesting life,” said Assistant Letcher Commonwealth’s Attorney Jenna Watts. “I am very pleased with the verdict.”