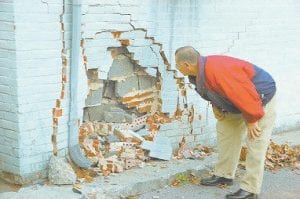 Cavalier Cafe owner Joe Eddie Eversole inspected the damage to the wall of his building after the mishap that left a cook badly injured.

A “freak accident” in Jenkins last week left one woman badly burned and authorities trying to find out why a late-model truck was able to roll down a steep hill even though it was in park gear and its emergency brake was set.

Reda Watkins, an employee at the Cavalier Cafe, was being treated in a Lexington hospital for injuries she suffered after being doused with hot grease when a 2004 Ford F-150 pickup slammed into the side of the building that houses the cafe and Boggs Pharmacy.

Authorities say the accident occurred about 6:45 a.m. last Friday (November 30) when the truck, owned by Jenkins Independent Schools Superintendent John Shook, rolled down High Street and into the side wall of the building while Shook was busy turning off Christmas lights decorating a nearby building owned by the Jenkins Kiwanis Club.

Watkins suffered severe burns when the impact of the collision caused grease to be thrown from a deep fryer onto her right side. Nearly all of the cooking equipment used by the restaurant, which fronts Main Street, is located along the wall near the rear of the building where the truck hit. Watkins was treated at Jenkins Community Hospital, which is located next to the cafe, before being transported the next day to the burn unit at the University of Kentucky Hospital. Her condition was not known early Tuesday morning. 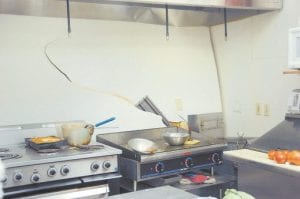 SCENE OF ACCIDENT – Reda Watkins was busy preparing food in the kitchen of the Cavalier Cafe in Jenkins early last Friday morning when a runaway truck crashed into the outside of the wall pictured above. Watkins was transported to the University of Kentucky Hospital’s Burn Unit for treatment. The restaurant could remain closed for at least two more weeks.

“In all the years we’ve been here a vehicle has never hit the building coming off the hill,” said Cavalier Cafe owner Joe Eddie Eversole. “It’s just a freak accident.”

Shook, who is in his seventh year as superintendent, suffered minor injuries after he fell while trying to get back inside the truck to bring it under control.

Shook said – and police and witnesses have confirmed – that he put the truck’s transmission in park and set the brake before he left the vehicle to turn off the lights at the Kiwanis Club, to which he belongs. The truck’s rear wheels were on level ground, while its front end was slightly over the crest of a steep hill that faces the side of the cafe/ pharmacy building. 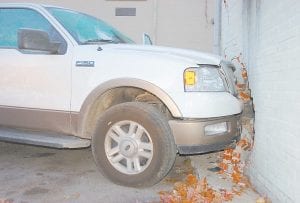 Jenkins Superintendent John Shook had been driving the pickup truck shown in photo at left before it rolled down High Street and into the wall of the Cavalier Cafe. Shook said the truck was in park gear with its emergency brake set when the mishap occurred. (Photos by Chris Anderson)

Shook said he heard a loud “pop” while walking back to the truck, but was unable to get from the rear of the vehicle and into the driver’s seat before it started rolling down the hill.

“There was nothing I could do,” Shook said. “By the time I got the door open and a hand on the wheel it was moving too fast for me to get in.”

Jenkins Police Chief Jim Stephens responded to the accident and found that the vehicle was in park with its emergency brake set. Witnesses who tended to Shook immediately after his fall confirmed that the vehicle was not tampered with after the accident. The truck was taken to Freedom Ford in Wise, Va., where it was originally purchased. The dealer has been asked to determine the cause of the apparent failure of the transmission and parking brake.

Eversole said the Cavalier Cafe will probably remain closed for at least two weeks, and that some equipment will have to be replaced before it can reopen. A portion of the outside wall must also be rebuilt.

The restaurant has been in business in Jenkins for more than 60 years – originally opening in 1944 before moving to its present location in 1947. The restaurant’s last extended closure occurred 14 years ago, on Thanksgiving Day in 1993, when a fire gutted the building.

“It’s in the hands of the insurance company now,” Eversole said when asked when he hopes to reopen the restaurant. “We’re just going to wait it out.”