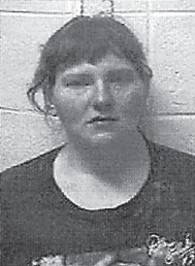 A Dry Fork woman remained in the Letcher County Jail this week awaiting a court hearing on charges that she endangered her three young children by leaving them in a hot car while she was shoplifting at a Whitesburg grocery.

“It was awful,” said Fields. “Out of my time I have spent working at the funeral home and the two years I have spent as a police officer, this was by far the worst thing that I have ever encountered. It was so emotional for the employees there. It was so bad.”

Fields said police were called to the store after Gibson told a store manager who caught her for shoplifting that she needed to check on her children who were waiting for her in a vehicle. The manager was on her way out of the store to check on the children when police arrived at 6:50 p.m. The manager and Whitesburg Police Officer Jarrad Hipps found all three children in the backseat of the unlocked car. A blanket had been draped over a car seat which held the infant.

“A two-month-old was in a car seat in just a diaper (and) covered up with a blanket,” said Fields. “They removed the blanket to find the child gasping for air, almost unconscious.”

The children were rushed inside the grocery store until medical personnel arrived to transport the baby to Whitesburg hospital. Fields said the infant spent Friday night in the intensive care unit at the Whitesburg hospital and was released on Saturday evening.

“It was devastating to all of us,” said Fields. “Everybody was in shock.”

Fields said the other two children who had been in the vehicle appeared to be fine. He said all four windows in Gibson’s vehicle were rolled down. Fields said the thermometer in his cruiser showed a temperature of 83 degrees, but he said weather could have been hotter.

Gibson is accused of placing $89.96 worth of stolen items into a diaper bag she had carried into the store.

“When she got out of that car going into the store with an empty diaper bag, she knew what she was doing,” said Fields.

Gibson took her two-year-old daughter with her into the store.

“The two-year-old witnessed it all,” said Fields.

Gibson is charged with felonly counts of first-degree wanton endangerment, first-degree criminal abuse and endangering the welfare of a minor. She also faces a misdemeanor charge of theft by unlawful taking (shoplifting).

Bond for Gibson is set at $10,000 cash. She asked for a bond reduction during her arraignment in Letcher District Court, which District Judge Kevin R. Mullins denied. Gibson pleaded not guilty to her charges and a preliminary hearing is set for 10 a.m. on July 28.

Fields said information he has gathered in his investigation will be presented to the Letcher County Grand Jury.