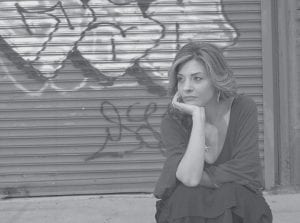 Actress Callie Thorne as Sheila Keefe is shown on the set of “Rescue Me.” Behind the dysfunctional firefighters who front the series, now in its fourth season, you’ll find the emotionally conflicted and gloriously insane women who love and fuel them. (AP Photo/Sony Pictures Television, Martin Crook)

Tommy Gavin has issues with women. Or maybe it’s the women on “Rescue Me” who have the issues.

Let’s break it down: Gavin, the alcoholic New York City firefighter played by Denis Leary, raped his estranged wife, Janet (Andrea Roth), but now they’re living together and taking care of her baby – which might be his or his recently deceased brother’s.

Gavin’s still carrying a torch for his dead cousin’s widow, Sheila (Callie Thorne), who accidentally burned down his beach house and almost left him for dead.

On last week’s episode of the FX dramedy (Wednesday, 10 p.m.), Gavin found himself drawn to the volunteer firefighter, Nona (Jennifer Esposito), who saved his life in the beach blaze – but can surely wreck it as easily as she threw him over her shoulder.

OK, so they all have issues.

Behind the dysfunctional firefighters who front the series, now in its fourth season, you’ll find the emotionally conflicted and gloriously insane women who love – and fuel – them.

“In a lot of television series, especially ones about men, the men are just complete goofs and the women have been the long suffering voice of reason … but it’s not real,” says Peter Tolan, co-creator of the series with Leary.

“If these women are consorting with (messed) up men,” Tolan continues, “they’ve got to be a little (messed) up themselves.”

Besides, we love watching strong women teetering close to the edge – be it the witchy Vanessa Williams on “Ugly Betty,” the morally divided Minnie Driver on “The Riches,” Jamie Pressly’s snappy she-devil on “My Name Is Earl” or all of those “Desperate Housewives.”

With the success of shows like “Desperate Housewives,” with its roster of over-the-edge female characters, “that can only beget more,” says Thorne, whose Sheila is the Lady Macbeth in “Rescue Me.” Her recent tem- per tantrum has Gavin under investigation by an insurance company and could threaten his job.

“Deep down she does have a good heart. … She wants to be happy and she wants Tommy to be happy,” she says. “Unfortunately, she gets herself so unraveled in trying to get to that end that she becomes this little Tasmanian devil trying to get to the good ending but doing it in a bad way. Maybe one day she’ll get it right, but I don’t know how much fun that will be to play.”

“Each week when I read the script, I’m scared and excited,” she says. “I’ve had abortions, I’ve lost a son, I’ve had a child, I’ve dated (Tommy’s) brother – then he died. The rape scene. We had a fire with the kids. … My daughter goes missing. There’s always something going on with her that has a lot of deep emotional sad places.”

“The women you see on the show are created in some part by Denis and Peter, but it’s these actresses who take it where it’s supposed to go,” says Esposito who, as Nona, becomes the one woman who can out-man Gavin.

“She’s really worse than the boys because she’s a woman who behaves like a guy, so he really doesn’t know what to do with her,” Esposito says.

Although “Rescue Me” has been widely acclaimed – including an Emmy nomination for writing – it’s also been criticized for being misogynistic in its representation of women.

“If we made all the women just insane shrews, we can also point to the men and say there’s none better there,” Tolan argues. “Damaged is interesting and anything else is not to me.”

“Nothing is sacred with them,” adds Roth of Tolan and Leary. “It just happens that the boys get to do funnier stuff, and when people make you laugh it’s easier to like those characters.

“If anyone out there is thinking that we, as actresses, have been victimized, I would say no women have been hurt in the filming of this show,” says Roth, laughing. “But trust me, all of these characters could use a good five or six years in therapy.”

“Now I would love to play a woman whose got good morals and is on top of her game and who knows what she’s doing, but that’s not the character,” says O’Neal, adding that the vibe of the show feels close to home.

“The quick wittedness is something I very much identify with and making fun of yourself,” she says. “And also making it all about sex, because growing up in my household it seemed like it was always about sex. It just seemed like (that) with my dad and my three brothers.”

Whether sexy – or just sexist – “Rescue Me” is steadily gaining female viewers, with 49 percent of the series’ audience now women.

“A lot of women love the show,” says Tolan. “But these are the ones who aren’t calling it misogynistic, of course.”