Women are the top cops at state police Post 13 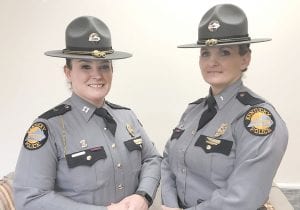 Given the attention that often comes with being two of only 15 Kentucky State Police officers who are women, Jennifer Sandlin and Jackie Joseph jokingly refer to themselves as “the unicorns.”

While the two longtime friends may not be quite as rare as an elusive unicorn, they do have the unusual distinction of being the only two women who hold the top leadership positions at one of Kentucky’s 14 state police posts.

Sandlin was appointed captain of KSP Post 13 in Hazard in September 2017. Joseph joined her a year later as when she became one of the post’s two lieutenants.

“Just because we’re both female we call ourselves unicorns just as a joke,” Capt. Sandlin said. “For the two of us to be together at one time, it is unusual.”

Unusual indeed when you consider the fact that about 870 troopers are now on active duty in Kentucky and only two of those hold the jobs of captain and lieutenant at a single post. Officers assigned to Post 13 patrol the counties of Letcher, Breathitt, Knott, Leslie and Perry. As the post’s commanding officer, Capt. Sandlin oversees 32 troopers and detectives, six sergeants, and the two lieutenants. Sandlin is also in charge of an additional 22 civilian employees who hold down dispatching and clerical jobs at Post 13. 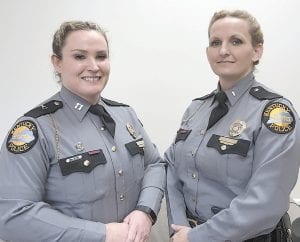 With a third woman, Vicki Day, now working as a detective at the Hazard post, and a fourth, Tiffany Bond, assigned to Post 9 in Pikeville as a detective, southeastern Kentucky is now home to more than one-quarter of all the women who are sworn KSP officers.

Capt. Sandlin and Lt. Joseph were interviewed during a recent visit to the offices of The Mountain Eagle. The two said they became fast friends after they transferred to Post 13 in 2006 to work as road troopers. Sandlin had been working in Pikeville; Joseph was at Morehead.

“It was neat to be working with another female,” recalled Joseph, a 1998 graduate of Whitesburg High School.

“ We hit it off pretty quick,” Sandlin replied.

The two continued to work together until 2009, when they began receiving a series of promotions.

“We got sent to two very different places,” said Sandlin, who in 2010 was reassigned to the Pikeville post as after being promoted to “squad sergeant” and placed in charge of managing trooper schedules and reviewing criminal cases for quality control. Joseph was promoted to the rank of sergeant a year before and was assigned to KSP’s Criminal Identification and Records Branch in Frankfort, where, among other things, she was in charge of the state’s sex offender registry and concealed carry gun licensing permits.

While Joseph and Sandlin are often mistaken for sisters when they are together in public in full uniform, there are few similarities in what led them to their decisions to become Kentucky State Police officers.

Joseph, a daughter of Mr. and Mrs. Jack Rogers of UZ, knew from an early age that she wanted to join the state police. She said that goal became even stronger when one of her high school teachers told her she was too small to be accepted into state police training.

“That motivated me even more to be a trooper,” she said, “but it was my career choice from Day One.”

Joseph said her desire to become a trooper was so strong that “I drove my application to the post in Hazard” on her 21st birthday, in March 2002. That came about three months after she earned her associate degree from Southeast Community College.

Sandlin said that while she “always held troopers in high regard,” joining the Kentucky State Police was not in her plans when she began attending college at Eastern Kentucky University after graduating from Perry County Central High School in 1998.

Sandlin, a former cheerleader for the Perry Central Commodores, had planned on becoming a forensic scientist upon graduating from EKU in 2002, and had even completed an internship in that field of study with the Tennessee Bureau of Investigation before changing course and deciding to become a state trooper while her fiancé and now-husband, KSP Detective Wes Sandlin, was going through the state police academy. Like Joseph, Sandlin was also 21 years old when she applied to the KSP.

Joseph is also married to a state police officer. Her husband, Jason Joseph, is a sergeant at the Pikeville post. And the similarities between Capt. Sandlin and Lt. Joseph don’t end there. Both women are 38 and both are the mother of two children, each having a son and daughter.

Joseph and Sandlin both say they are appreciative of the many opportunities with which they say they’ve been provided since joining the state police. While still road troopers, both were chosen to work the Kentucky Derby in Louisville, where they chauffeured celebrity guests and politicians invited by the governor to attend the world’s most famous horse race. One year Joseph, while pregnant, organized security for the famed Rolex Three-Day Equestrian Event held at the Kentucky Horse Park near Lexington.

Joseph and Sandlin both agree that drug abuse, especially that which involves the highly addictive drug methamphetamine, is the most serious problem facing southeastern Kentucky today.

“People act completely different on meth than they did on opioid pills,” said Sandlin.

Added Joseph, “Now we get people with bizarre behavior — people out walking nude, people hiding under their neighbors’ porches.”

Sandlin counts her involvement with the Kentucky State Police Angel Initiative as one of the most rewarding things she’s been a part of as a member of the state police.

Under the program, which started in 2016 and was piloted by Sandlin when she was still at the Pikeville post, any person battling drug addiction can go to any of the state’s 14 KSP posts and get help with finding treatment without fear of facing criminal charges.

Reflecting on the three months she has been back at the Hazard post, Joseph said she continues to be amazed by the reactions of some members of the public who appear to be shocked when they see her and Sandlin away from their headquarters in full uniform.

Joseph said it’s easy “to forget sometimes how strange it is” for people to see one female state trooper in uniform, much less two at the same time.