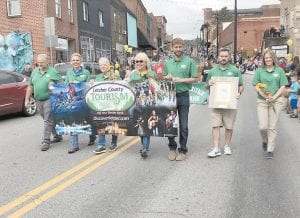 Let’s do first things first. If you are among the well over 100 readers who subscribed to the $5 tomato seed offer last month, please know that we will eventually get them to you but it’s not apt to happen as soon as we had hoped. We had simply anticipated that 20 or so of you would want them. Now we are in over our heads but we do know how to swim. I’ll be saving seeds, much to Mr. Parkinson’s dismay, until frost kills the vines. In fact, I just devoured two Giant Syrians in the process of getting about 100 of their seeds into a fermenting jar before starting this missive. You will get your seeds before Christmas. I’m still lining up help.

In the meantime, and in the interest of full disclosure, please be advised that the remainder of this column is simply my imagination on overload after recently studying a few dozen woolly worms in several locations near Berea, Richmond, Lancaster, Mount Vernon and Paint Lick While the first paragraph, above, and the first sentence of this one are absolutely true, there are people who would call the following creativity, “fake news” and, if they took it seriously, they would be correct. Please switch off your serious button and find your saltshaker. You may need a grain or two. 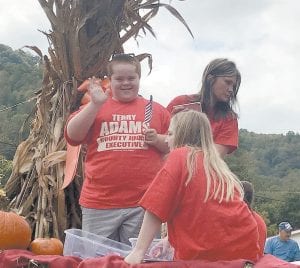 Watson Adams waved from a float on which he was riding through the parade in support of his father, Terry Adams, is running for Letcher County Judge/Executive.

I have recently been in touch with the National Association of Woolly Worm Winter Weather Watchers (NAWWWWW). This week’s column is devoted to their annual prediction for what’s supposed to happen, weather-wise, between the first of December 2018 and the first of April, 2019. Sometimes they hit it on the nose and sometimes they don’t. Don’t blame me. I’m simply the messenger.

The members of NAWWWWW with whom I spoke were a rather sad, disgruntled and bedraggled lot who told me that I was lucky to be talking to any woolly worms at all. I was informed that the central Kentucky population has been decimated over the summer and that well over half had either drowned in their homes or been washed downstream to the Mississippi Delta if they were fortunate enough to find a piece of wood to float away on. 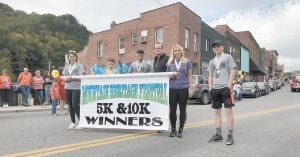 “Many of us were scalded to death after those times in July when it rained all night and the temperature hit nearly 100 the next day before we had time to dry out,” one very scruffy old fellow said.

“Most of those of us who are left are looking for attics or high barn lofts in which to spend the winter because there’s no letup in sight for all this rain,” another wet woolly in front of Paint Lick’s Copperhead Consulting office complained. “Heck, I’d sleep with a snake if it would promise to keep me dry or give me a ride to high ground if we both got flooded out,” he intoned.

“There’s no such thing as a safe basement to sleep out this winter,” said a woolly in the parking lot of Richmond’s White House Clinics last Thursday evening. “If you don’t drown you’re apt to me suffocated to death by mold.”

So that’s the forecast for central and eastern Kentucky. Every woolly worm I have encountered says the coming winter will set records for wetness and most of it will be in the form of rain. It’ll also be the mildest, temperature-wise, winter we’ve had in over 10 years. There will be a few snows but they will turn to mud within 24 hours unless you live on top of Pine or Big Black Mountains in Letcher and Harlan counties where the snow may hang around for more extended lengths of time. 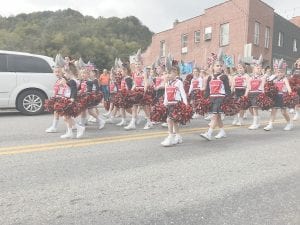 The Martha Jane Potter Elementary School cheerleaders were dressed as baby sharks for the parade down Main Street.

However, if that sounds dismal, fall down on your knees and thank the Lord that you don’t live in Wind Gap, Pennsylvania where the wetness will also prevail but totally in the form of snow. The roads will be so deeply covered that they’ll call in the Army Corps of Engineers to dig tunnels from The Wind Gap Diner out the entire length of Jacobsburg Road so that my pal, Fred Beste, can get his daily fix of scrapple.

Once the tunnels are completed, folks like Fred won’t have to worry about the roads being snowplowed because they will be roofed over like igloos that extend for many miles. 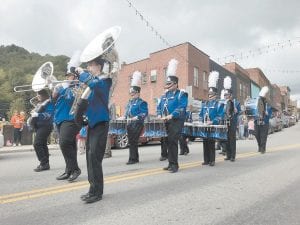 I have no idea how they’ll cope next spring when the weather warms up and all those tunnels start caving in. If I were Fred, I’d be seeing if I could get my scrapple home-delivered. Actually I would not be ordering scrapple to begin with. The janitor’s socks boiled in week-old dishwater tastes better than scrapple. 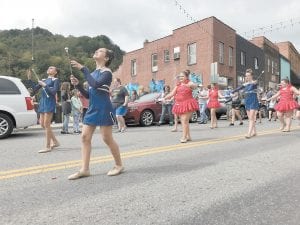 The Silver Spinners are always a parade favorite.