Words to consider for nation and us 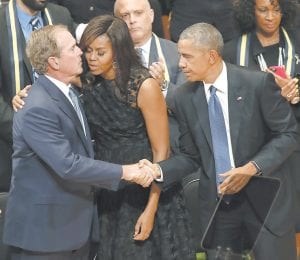 Outrage over last week’s fatal police shootings in Louisiana and Minnesota and deep anger over the subsequent killings of five police officers by a domestic terrorist in Dallas didn’t spare those of us who live hundreds of miles away in Letcher County, where a battle on social media broke out after at least one Whitesburg resident posted a sign supporting the “Black Lives Matters” movement.

The sign, clearly visible from Main Street, was painted in large letters on a window of a Cowan Street building last week after the shooting deaths of two African-American men on July 5 and July 6 — Alton Sterling, 37, of Baton Rouge, Louisiana and Philando Castile, 32, of Falcon Heights, Minnesota. The five Dallas officers were killed by sniper fire on the night of July 7 while they were protecting an until-then peaceful demonstration organized by the Dallas chapter of Black Lives Matter in the wake of the shootings of Sterling and Castile. The sniper, who wounded nine other officers and two civilians who attended the protest, was identified as Micah Johnson, a 25-year-old African-American military veteran. Police said Johnson told them he wanted to “kill white people.” 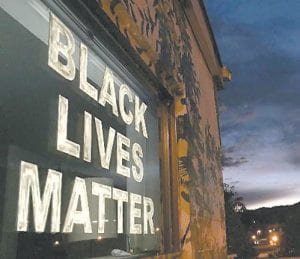 A “Black Lives Matter” sign attached to a building near Whitesburg’s Main Street resulted in a war of words on social media last Friday morning that grew even more heated after it was shown on television news. A “Blue Lives Matter” sign was placed downtown Tuesday on a highway overpass bridge. (Photos courtesy WYMT-TV, Hazard)

Against such a backdrop, a war of words broke out here on the Facebook social media site on the morning of July 8, with some commenters accusing the person or persons responsible for posting the sign as troublemaking outsiders. Others defended the sign and its owner(s), saying the sign’s true meaning was being misunderstood. While some of the comments on both sides of the issue were well thought out, many of the words seem to have been written in the heat of the moment.

More than one Facebook contributor used the dispute as an excuse to attack the entire town of Whitesburg and its business community, no member of which had anything to do with displaying the Black Lives Matter sign or, as far as we know, a “Blue Lives Matter” sign that was attached to an overpass bridge in answer. Among the more ridiculous comments was one from a man who said the entire town is “ran by hippies” who are “living high on the hog” while the rest of the county “is out of a job.” 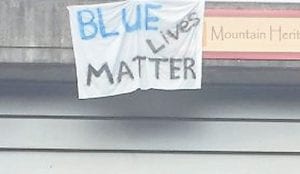 Such buffoonery brought this clever comment from Whitesburg businessman Charlie Wright: “Just to clear the air, I run a business in town, I’m not a hippie I don’t guess, and I don’t get into politics.”

We thank Mr. Wright for speaking up on behalf of the town’s business owners, nearly all of them independents who work hard to try to make a living under economic conditions that can at best be called challenging.

Wherever you stand on the issues surrounding the terrible national events of the past week we leave you with these words spoken in Dallas Tuesday afternoon by former President George W. Bush and President Barack Obama as the two appeared together in a show a unity at a memorial for the slain officers. (The comments came after Bush and Obama praised by name the five slain officers, Lorne Ahrens, Michael Krol, Michael Smith, Brent Thompson, and Patrick Zamarripa.)

“At times, it seems like the forces pulling us apart are stronger than the forces binding us together. Argument turns too easily into animosity. Disagreement escalates too quickly into dehumanization. Too often we judge other groups by their worst examples, while judging ourselves by our best intentions. And this has strained our bonds of understanding and common purpose.” — former President George W. Bush

“I know that Americans are struggling right now with what we’ve witnessed over the past week. First, the shootings in Minnesota and Baton Rouge, and the protests, then the targeting of police by the shooter here — an act not just of demented violence but of racial hatred. All of it has left us wounded, and angry, and hurt. … We know that the overwhelming majority of police officers do an incredibly hard and dangerous job fairly and professionally. They are deserving of our respect and not our scorn. And when anyone, no matter how good their intentions may be, paints all police as biased or bigoted, we undermine those officers we depend on for our safety. And as for those who use rhetoric suggesting harm to police, even if they don’t act on it themselves — well, they not only make the jobs of police officers even more dangerous, but they do a disservice to the very cause of justice that they claim to promote.” — President Barack Obama