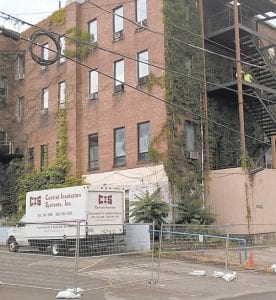 HOTEL WORK BEGINS — Fencing is now up at the rear of the Daniel Boone Hotel in Whitesburg as workers prepare to begin the stabilization project on the building. (Photo by Sam Adams)

Contractors this week fenced off the area around the Daniel Boone Hotel and began preparing to remove asbestos from the building.

The work marks the first visible movement in stabilizing the 100-year-old hotel since the City of Whitesburg received it as a donation from the Dawahare family in 2009.

About a third of the roof and all three floors below it collapsed last year because of water entering a broken skylight. Contractors will begin scooping out the debris and shoring up what is left of the building next week in preparation for replacing the floors, roof and elevator shaft.

Workers began taking boxes of supplies into the basement on Monday and were going in and out of doors on the back fire escape Tuesday. Whitesburg Mayor James Craft said Structural Systems Repair Group of Cincinnati is expected to remove a 12-foot section of cut stone from the basement wall soon to allow skid loaders to move it out of the building for demolition, and later, deliver materials for reconstruction.