Work on US 119 should begin this spring, officials tell crowd 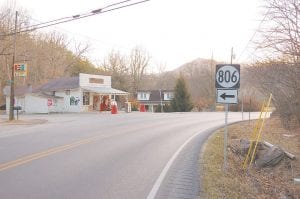 DANGEROUS CURVE – Residents of the Eolia area met with state highway officials over the weekend and asked that this blind curve on U.S. 119 be fixed when the road is rebuilt. (Photo by Chris Anderson)

Construction is expected to begin this spring on U.S. 119 between Eolia and Partridge, near the Harlan County line. State highway officials visiting Letcher County said bids for construction should be awarded in February or March, and that the widening and straightening of the twolane road will begin soon after.

The main topic of discussion was the beginning date for construction. George told the audience that an unexpected visit from an Indiana bat had caused yet another delay because the transportation department had to file an Environmental Impact Statement to make certain the bat’s habitat wouldn’t be disturbed by the road construction. Damron said bid lettings will take place for Section 1 in either February or March and construction should start soon after. Section 1 covers the area from Partridge to the New Church of Christ at Colliers Creek. George said the other three sections of the road will be let in 2008 as well.

George invited residents to e-mail her with any questions or concerns at sara.george@ky.gov or Keith Damron at keith.damron@ky.gov. She said that e-mails would be answered and she or Damron would do their best to answer any questions.

“We are public servants and our job is to serve you,” said George. “We want to make this job happen as quickly and easily as possible.”

Damron said the last time he had been at the Oven Fork Senior Citizens Center, he hadn’t been sure he would escape with his life due to the citizens’ anger. He said it has taken so long to get the work done for a number of reasons, but primarily due to the unique nature of Pine Mountain.

“The situation is unique,” said Damron. “More than anyplace in Kentucky, there are more species of animals and plants here, and the geology is unique. It’s a lengthy process.”

Damron said that some rightof way issues are still being finalized on Sections 2- 4 and that a federally mandated bridge will also add time to the completion of the work. He said the state had originally envisioned several smaller bridges, but the federal government had demanded an 1,800-foot-long bridge at Collier’s Creek to address environmental concerns. He also said area coal companies have been very cooperative and said they would not impede the work even if no final agreement has been reached.

Sara George added that funding is already in place for the entire project and will not be impacted by the state’s budget woes. She said the project is primarily funded by the federal government at an 80/20 ratio and the state won’t to do anything to jeopardize the federal funding at that rate. Damron added that interested parties can track progress on the Internet by going to KY.Gov, clicking on Transportation Cabinet, Construction, and going to Contract Procurement. Then go to Schedule of Lettings. He said the entire project should take around four years depending on how bad the winters are.

Representative Combs added that the large amount of federal funding puts everything in a different light as well as on a different schedule. Combs said it is important to maintain good lines of communication and urged anyone with questions or concerns to contact her as well and Damron and George. She said she would make certain to address the concerns of any citizen.

Senator Turner told the audience the US 119 project is the biggest project in his district and said that DOT District 12 has been extremely cooperative. Turner said the legislature will work together to see that the project is completed in a timely fashion and urged residents to contact him with questions or concerns.

“We want to do what you want us to do,” said Turner. “That’s why we were elected.”

Residents of Eolia brought up another concern that was not scheduled for discussion. Several people voiced their concern about the intersection of Highway 806 and US 119 at the Maggard Store at the entrance to Eolia as being extremely dangerous because of the lack of visibility in a sharp curve. They said it is particularly dangerous for school buses going and coming from Arlie Boggs Elementary School. Damron said the DOT had tried to include that in the work done on the Pine Mountain section of the road but couldn’t get funding. He also said it could be tricky because of the way rock lies in Pine Mountain. He said a similar project to take off a knoll that restricted vision in Harlan County had caused the entire mountain to begin slipping and had required considerable work to stabilize it.

Senator Turner added that Kentucky law requires both sides of the right of way to be finished to specifications, which might be difficult on the site in question. However, both Turner and Combs said they would work with the DOT to find a solution to the problem. Damron added that DOT engineers are working on plans to address the situation as well.

Judge Jim Ward said the county is also concerned about the intersection, but that because it is on a state road the county has few options. Ward also said the updated maps Keith Damron brought to the meeting will be available or anyone who wishes to examine them in his office at the Letcher County Courthouse.