Work to begin soon on project to fix old hotel 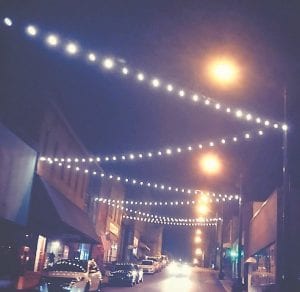 Pictured here is some of the new downtown lighting the City of Whitesburg will have in place for the upcoming Oktoberfest that will be held on October 20.

The Whitesburg City Council heard some good news this week in reports from Whitesburg architect Bill Richardson, the project architect for the restoration of the Daniel Boone Hotel building on Main Street.

At the council’s September meeting Tuesday night, Richardson said there has been progress on the project and reminded the council that the hotel is on the National Register of Historic Places because of its outside facade. He said it is fitting that the restoration project is getting started in 2018 because it marks the 100th anniversary of the hotel’s original design. Richardson said the city fathers had envisioned having the best hotel in the state when it was built.

Richardson said that the structural integrity and feasibility studies of the building conducted by Poage Engineering have shown what needs to be done to stabilize the building, and the next step is to take the necessary action to begin the work. He said the city will need to obtain clearance on sidewalks in the front of the building and space behind it for cranes, dumpsters and other construction equipment, and will need to get the roof replaced to make sure the work on the building is kept dry. Richardson told the council that the portion of the roof that had fallen had pancaked the floors below it and the cleanup will need to begin soon as well.

Once the cleanup is underway, workers will take drywall and other material “down to the studs” so the superstructure needs can be addressed. He showed the demolition plans for all three floors and said that moisture and mold mitigation will have to begin soon. However, he stressed the need to get the roof on so the lower floors will be dry when they are built. Richardson said the contractors will clean as they go and they will make sure the superstructure is clean, dry and structurally stable.

Angelia Smith Hall of the Kentucky River Area Development District, the planning agency that is managing the grants for the project, told the council that this stage represents 25 percent of Richardson’s contracted work and asked the council to approve a drawdown of $13,500 to cover the first quarter of his contract. The vote to pay Richardson was unanimous.

In a related matter, Hall also asked the council to authorize payment to Nesbitt Engineering for a hydraulic analysis the company conducted to determine the future water needs of the city. Mayor James Wiley Craft said that Paul Nesbitt had told him the city can pay the bill in two payments and the council voted to pay half of the $13,633 invoice. Hall also transmitted a request from Nesbitt, who did not attend the meeting, to advertise for engineering services for the upcoming sewer project. The council approved the request.

In other business, the council conducted the second reading of Ordinance 2018-3, which sets the city tax rates on Real and Personal Property for the tax year. The rate is $.34 per $100 of Real and Personal Property and will be submitted to the Letcher County Fiscal Court. The tax rate is unchanged from the previous year and Mayor Craft said the council had been able to lower it from $.37 per $100 when the current council came into office.

The council also conducted the first reading of the “pooper scooper” Ordinance 2018-4. The ordinance mandates that people walking their dogs in the city clean up their pet’s solid waste and dispose of it. Craft said the waste gets on pedestrians’ shoes, is thrown by Weed Eaters and lawn mowers, and creates a health hazard in the city. The ordinance calls for a $25 fine for the first offense, $50 for the second offense, and $100 for each offense after that. Craft said Councilmen Derek Barto and Mike Jackson will look into having plastic bags for the waste distributed to pet owners.

The city will have new downtown lighting in place for the upcoming Oktoberfest that will be held on October 20. Mayor Craft expressed his thanks to Missy Matthews who paid for new decorative lights that have been strung in the city. Craft said the lights make a beautiful addition and as soon as the necessary cable to hang the rest of the lights comes in this Thursday, the remainder will be installed.

The council also approved a request from the May Fest Committee to allow it to use city streets on May 18, 2019 for the spring festival. Leanne Mullins of the Mountain Heritage Festival Committee made her annual request for the usual city cooperation, the use of city parking lots and other city services for the festival and closing the bypass entrance ramp into the city for booths and tents. The council voted unanimously to approve the request and Mayor Craft thanked Mullins and the committee for the work they do to make the Mountain Heritage Festival such an excellent event. He also praised Mullins and Jolinda Wright for their work in keeping the city’s flower boxes beautiful.

Water Maintenance Director Chris Caudill reported that August had been a good month for the city’s water and sewer plants and there had only been one water line break. He said that any month when there is only one water leak is a good month. Caudill said there had been some issues with controls in the sewer plant due to a grounded line, but it had been repaired. Mayor Craft said he can always depend on Caudill to do what is needed in the city and praised him for his work on and off the job to make Whitesburg a better place.