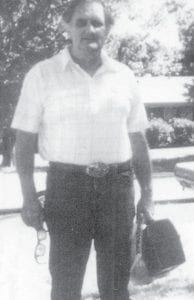 Everett Vanover is pictured coming home from Syar Industries, where he worked until he was 81 years old managing a printing company in Napa, Calif.

I was in the military 27 years, 11 of those years at Travis Air Force Base, Calif.

In 1960, the office manager of Syar Industries at Napa, Calif., asked me to set up a one-man print shop for them and print for them on weekends.

I could use the extra money with my large family, so I took the job.

This company was one of the largest construction outfits in northern California, and the office manager had been my boss on my first tour overseas.

I bought a plate maker, printing press and a paper cutter and worked on weekends, the days I was off from the military and when I took my leave time, for eight years.

I made a lot of money.

In 1968 I was assigned to Germany for three years as noncommissioned officer in charge of all printing in Europe.

In 1971 I was assigned to the Pentagon, where only the top five percent of military personnel are sent. All this time, the boss at Syar Industries was calling me, wanting to know when I would retire from the military and come back and work for them.

I did not like my job at the Pentagon, so I retired from all that classified work I had been doing for 27 years.

I went back to California, worked part-time and fulltime for Syar Industries for 49 years, and retired at 81 years old. I’ve been printing for 65 years. I could not have asked for a better career field.