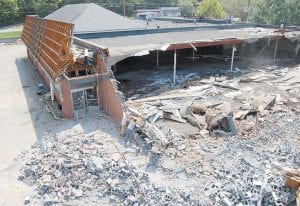 Paul Hall, 47, of Neon, was working under a section of the roof of the old A&P building that was still intact when the roof began collapsing on August 18. Hall was taken to the Whitesburg Appalachian Regional Hospital by ambulance and was treated and released. In the photograph above, Hall, pictured wearing a yellow hard hat, was sorting through debris on August 13. (Photo by Sally Barto)

A construction worker removing debris from the old A&P building in Whitesburg was injured after a section of roof collapsed on him Tuesday afternoon.

Perry Fowler, a firefighter with the Whitesburg Fire Department, said Paul Hall, 47, of Neon, was under a section of the building that was still intact when a section of the roof began collapsing from the rear of the structure around 4 p.m. Fowler said the portion of the roof that collapsed fell in pieces rather than all at once.

“It was a traveling collapse which gave him time to move and lessened the impact,” said Fowler.

Fowler said Hall tried to run out from under the roof and almost escaped before a portion of it fell on him.

He said the section that collapsed was approximately 70 feet long by 50 feet wide.

Fowler said an excavator operator who was removing large sections of beams from the ground outside the building saw the roof collapse and saw Hall try to escape. The roof, which has heavy stone and sand on it, holds a tremendous amount of weight, Fowler said.

Hall was treated at the Whitesburg hospital and later released.

The Letcher County Fiscal Court purchased the old grocery store building, located beside Dairy Queen, last spring and plans to use the site for a recreation center. In June, the court awarded a contract to demolish the building to David Addington and Todd DePriest of Jenkins, who submitted the low bid of $44,600.