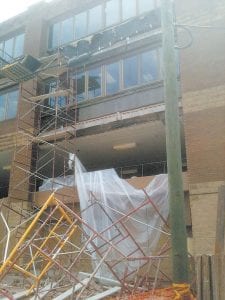 Two construction workers were injured in downtown Whitesburg last Wednesday when scaffolding on which they were standing collapsed under the weight of a brick wall which worked its way loose during repairs to the third story of the Whitaker Bank building in downtown Whitesburg. Both workers were airlifted to the Holston Valley Hospital Trauma Center in Kingsport, Tenn., for treatment of injuries they received when they fell to the ground in the August 10 mishap. One worker was identified as James Bradley Johnson Jr. of Willard in Perry County. Officials did not know the name of the second man. “They shipped those guys out of here quick and I couldn’t get any information,” Acting Whitesburg Police Chief Tyrone Fields said Tuesday. “They are still alive.”