World class jerk, but a criminal? 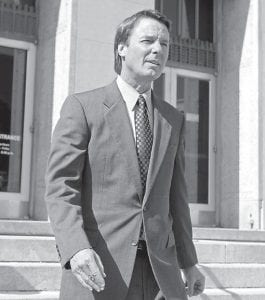 Former presidential candidate Sen. John Edwards left a federal courthouse in Greensboro, N.C., earlier this week. Edwards is accused of conspiring to secretly obtain more than $900,000 from two wealthy supporters to hide his extramarital affair with Rielle Hunter and her pregnancy. He has pleaded not guilty to six charges related to violations of campaign-finance laws. (AP Photo)

If this were a reality show and the question for the participants to decide was whether John Edwards was the most narcissistic man on the planet, the biggest liar, the worst husband and father, a self-absorbed egomaniac who betrayed the trust of his family, his staff and his supporters and was willing to risk his party’s chance at the presidency in service of his own outsized ambition, then no question.

Throw the mud pies. Put the crown of thorns on his head.

But a felon for violating campaign finance laws?

Come again? Is there really so little federal crime in North Carolina that this is the best prosecutors can do with their time?

In case you have been happily in a hole on this one, Edwards is the former presidential and vicepresidential candidate who, while his wife was in remission from cancer, took up with a “videographer” who apparently had trouble keeping the camera focused but was hired anyway and traveled with him on the private plane and then got pregnant after he had promised his wife that the affair was over. So with his wife dying of a recurrence of cancer, Edwards decided that the best course was to stay in the race, lie to his wife, have his aide claim paternity, and let two of his richest and most loyal supporters come up with the cash to hide the videographer and her baby, along with the putative father and his wife and kids.

Edwards’ victims — and there were plenty — were not Rachel (Bunny) Mellon and the late Fred Baron, whose funds he allegedly misused in violation of the federal laws governing campaign contributions. They knew what they were doing. They didn’t expect to get special benefits in the next Edwards administration that would allow them to make more money or pollute more or whatever.

The prosecution’s theory is that because the law limits individual contributions to $3200, if Edwards received six-figure contributions from Mellon and Baron to support his campaign, then he was violating campaign finance laws. On the other hand, if, as the defense claims, what he was doing was using their money to hide the affair and pregnancy so his wife wouldn’t find out, he wasn’t violating campaign finance laws since these weren’t campaign expenditures.

The prosecution claims Edwards knew all about the hush money that financed the cover-up. The defense says it was all the work of his former top aide, the guy who stood by his boss by publicly claiming paternity and then used some of the money to take his own wife and kids to Disneyland and build a fancy pool in his yard.

Yuck — on all counts.

So far, we’ve had the former aide who was a true believer before he became a sleaze bucket (although certainly not as big of a sleaze bucket as his former boss), his wife, who was tough as nails on the stand, and an endless back and forth about whether the money was meant to help the campaign or to keep Elizabeth Edwards in the dark (it would seem both), and whether the aide and his wife with their new pool were no better than Edwards (anyone is better than Edwards).

Baron has since passed away, and Mellon, at 101, is too ill to testify. But her lawyer is expected to testify, presumably that she understood that the money was for a personal matter and never discussed it with Edwards.

Then you’ve got the former staffers, young people (depending on how many testify, including at least one whom I know well) who thought they were signing on with a guy who wanted to cast a spotlight on the “two Americas” and the lingering disgrace of poverty in America — but not involve them, directly or indirectly, in his own disgrace.

And of course, sitting next to her father (when she isn’t tearing up and leaving the courtroom as she did during the testimony about Elizabeth baring her chest and confronting her husband in an airport hangar during a campaign stop) is John and Elizabeth’s 30-year-old daughter Cate, who has carried herself through this with the kind of grace and dignity that suggests she takes more after her mother than her father.

I don’t feel sorry for John Edwards, not for a minute. But in a time when rich donors can spend unlimited amounts influencing the outcome of campaigns, turning the money Mellon and Baron contributed toward the Edwards cover-up into a federal case under the argument that it was really a “campaign donation” is hard to grasp.

Judge Judy could handle this. Federal judges and prosecutors shouldn’t be soap-opera stars.