Use of pain medicines up by 90%, analysis finds 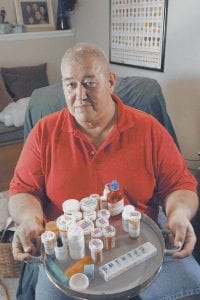 LEGITIMATE PATIENT – Retired U.S. Marine Staff Sgt. James Fernandez, 54, of Fredericksburg, Va., held a tray recently to show the daily prescription medicines he uses to overcome his severe pain. Fernandez, who survived two helicopter crashes and a bout with Gulf War Syndrome over 20 years in the Marine Corps, remains disabled from his service-related injuries and takes the equivalent of nine painkillers containing oxycodone every day to deal with crippling pain.(AP Photo)

Retail sales of five leading painkillers nearly doubled over an eightyear period, reflecting a surge in use by patients nationwide who are living in a world of pain, according to a new Associated Press analysis of federal drug prescription data.

The analysis reveals that oxycodone usage is migrating out of Appalachia to areas such as Columbus, Ohio, and Fort Lauderdale, Fla., and significant numbers of codeine users are living in many suburban neighborhoods around the country.

The amount of five major painkillers sold at retail establishments rose 90 percent between 1997 and 2005, according to Drug Enforcement Administration figures.

More than 200,000 pounds of codeine, morphine, oxycodone, hydrocodone and meperidine were purchased at retail stores during in the data. That is enough to give more than 300 milligrams of painkillers to every person in the country.

Oxycodone, the chemical used in OxyContin, is responsible for most of the increase. Oxycodone use jumped nearly six-fold between 1997 and 2005. The drug gained notoriety as “hillbilly heroin,” often bought and sold illegally in Appalachia. But its highest rates of sale now occur in places such as suburban St. Louis and Fort Lauderdale.

“What we’re seeing now is the rest of the nation catching up to where we were,” said Robert Walker, a researcher at the University of Kentucky Center on Drug and Alcohol Research.

The world of pain extends beyond big cities and involves more than oxycodone.

In Appalachia, retail sales of hydrocodone – sold mostly as nation. Nine of the 10 areas with the highest per-capita sales are in mostly rural parts of West Virginia, Kentucky or Tennessee.

Dr. Jeffrey Gordon, director of the blood and cancer center at Day Kimball Hospital in Putnam, Conn., said Vicodin is a popular painkiller to give patients after surgery, and many doctors are familiar with it.

“Over the past 10 years, there has been much better education in the medical community to … ask if people are having pain and to better diagnose and treat it,” Gordon said.

Suburbs are not immune to the explosion.

While retail sales of codeine have fallen by one-quarter since 1997, some of the highest rates of sales are in communities around Kansas City, Mo., Nashville, Tenn., and on New York’s Long Island.

An AP investigation found these reasons for the increase:

– The population is getting older. As age increases, so does the need for pain medications. In 2000, there were 35 million people older than 65. By 2020, the Census Bureau estimates the number of elderly in the U.S. will reach 54 million.

– Drugmakers have embarked on unprecedented marketing campaigns. Spending on drug marketing has zoomed from $11 billion in 1997 to nearly $30 billion in 2005, congressional investigators found. Profit margins among the leading companies routinely have been three and four times higher than in other Fortune 500 industries.

– A major change in pain management philosophy is now in its third decade. Doctors who once advised patients that pain is part of the healing process began reversing course in the early 1980s; most now see pain management as an important ingredient in overcoming illness.

Retired Staff Sgt. James Fernandez, 54, of Fredericksburg, Va., survived two helicopter crashes and Gulf War Syndrome over 20 years in the Marine Corps. He remains disabled from his service-related injuries and takes the equivalent of nine painkillers containing oxycodone every day.

“It’s made a difference,” he said. “I still have bad days, but it’s under control.”

Such stories should hearten longtime advocates of wider painkiller use, such as Russell Portenoy, head of New York’s Beth Israel pain management department. But they have not.

“I’m concerned and many people are concerned, that the pendulum is swinging too far back,” he said.

– More people are abusing prescription painkillers because the medications are more available. The vast majority of people with prescriptions use the drugs safely. But the number of emergency room visits from painkiller abuse has increased more than 160 percent since 1995, according to the government.

– Spooked by high-profile arrests and prosecutions by state and federal authorities, many pain-management specialists now say they offer guidance and support to patients but will not write prescriptions, even for the sickest people. The increase in painkiller retail sales continues to rise, but only barely. There was a 150 percent increase in volume in 2001. Four years later, the year-to-year increase was barely 2 percent.

– People who desperately need strong painkillers are forced to go long distances – often to a different state – to find doctors willing to prescribe high doses of medicine. Siobhan Reynolds, widow of a New Mexico patient who needed large amounts of painkillers for a connective tissue disorder, said she routinely drove her late husband to see an accommodating doctor in Oklahoma.

Perhaps no place illustrates the trends and consequences for the world of pain better than Myrtle Beach, S.C., a sprawling community of strip malls, hotels and bars perched along a 60-mile strip of sand on the Atlantic Ocean. The metro area is home to 350,000 people but sees more than 14 million tourists annually, drawn to its warm water, golf courses and shopping.

During the eight-year period reflected in government figures, oxycodone distribution increased 800 percent in the area of Myrtle Beach, partly due to a campaign by Purdue Pharmaceuticals of Stamford, Conn. The privately held company has pleaded guilty to lying to patients, physicians and federal regulators about the addictive nature of the drug.

Use of other drugs soared in the area, too: Hydrocodone use increased 217 percent; morphine distribution went up 180 percent; even meperidine, most commonly sold as Demerol, jumped 20 percent.

It is no small wonder that federal authorities suspected the area was home to a notorious “pill mill,” or a clinic that dispenses prescription medication without verifying that it’s needed.

The U.S. attorney for South Carolina secured a 58-count indictment in June 2002 against seven physicians and one employee of the Comprehensive Care and Pain Management Center, a nondescript storefront on Myrtle Beach’s main drag.

Tipped off by local pharmacists concerned about an increase in the volume of painkiller prescriptions, the federal investigation created a furor in the medical profession. The owner, D. Michael Woodward, was sentenced to 15 years in the case and has relinquished his license.

A second physician, Deborah Bordeaux, had worked at the clinic less than two months before quitting in disgust. Bordeaux, now serving a two-year prison term, was threatened with a 100-year sentence if she did not help the prosecution.

Officials with the Justice Department and DEA would not discuss what some activists say is a “war on doctors.”

Reynolds, the widow who drove her late husband hundreds of miles for his pills, became an activist after the Myrtle Beach indictments. She contributed money to appeal some of the criminal convictions in South Carolina and started the Pain Relief Network, an advocacy organization for people living in pain. She believes the doctors sent to prison were railroaded.

Bordeaux’s husband, Edworth Swaim, agrees. A retired U.S. Postal Service employee, Swaim believes his wife was sentenced to two years because she would not turn on her former colleagues. Even though Bordeaux had worked at the clinic less than two months and eventually sued over what she alleged was rampant Medicare fraud, he said she did not stand a chance of avoiding prison.

“She wasn’t guilty of anything, so she wasn’t going to plead to anything,” Swaim said. “She was absolutely railroaded, made an example of. I can’t tell you how angry I am.”

Myrtle Beach physicians are not convinced that the “Myrtle Beach Eight,” as they became known, were innocent.

A Myrtle Beach internist who also works in addiction medicine, Brian Adler, said physicians were flooded with patients seeking pain medicine after the clinic was shut down.

The community has a slightly higher-than-average number of older people and relatively high numbers of people between 21 and 64 who describe themselves as disabled.

“There’s a significant problem with narcotics in this area,” Adler said. After the pain management clinic closed, “all those folks were like rats, scurrying from a burning building, trying to get their fix.”

Other physicians were concerned about patients with legitimate needs for painkillers. The federal bust raised the stakes.

When radio commentator Rush Limbaugh settled a federal case charging him with illegally obtaining painkillers, he did not get prison time. Neither did NFLstar Brett Favre, who publicly acknowledged an addiction to Vicodin that he obtained legally.

To pain management specialists, they were being blamed for everyone’s addiction.

The DEA cites 108 prosecutions of physicians during the past four years; 83 pleaded guilty or no contest, while 16 others were convicted by juries. Eight cases are pending, and one phy- sician is being sought as a fugitive.

In congressional testimony, the agency’s deputy assistant administrator, Joseph T. Rannazzisi, estimated that fewer than 1 percent of the nation’s physicians – under 9,000 – illegally provide prescription drugs to patients. He told lawmakers it is far more common for people to illegally obtain prescription drugs from friends and family members.

“It is not merely illegal but could feed or lead to an addiction and place that loved one in a life-threatening situation,” Rannazzisi said.

It is impossible to reliably measure painkiller abuse.

A 2004 government study estimated between 2 million and 3 million doses of codeine, hydrocodone and oxycodone are stolen annually from pharmacies, distributors and drug manufacturers. The AP’s analysis only included retail sales and did not include estimates of diverted pharmaceuticals.

The decision gave him peace of mind, but he does not expect there to be less of a need for painkillers or physicians who prescribe them.

“People with cancer are surviving longer, elderly people are living longer,” Charles said. “So, physicians are walking a fairly fine line. We’re walking a narrow path. And I think we’ll continue to see it for a while.”