World’s demand for coal will continue many years 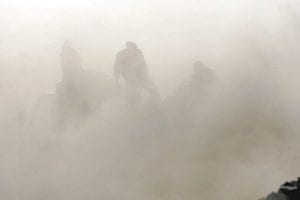 Almost nonstop, gargantuan 145-ton trucks rumble through China’s biggest open-pit coal mine, sending up clouds of soot as they dump their loads into mechanized sorters.

The black treasure has transformed this once-isolated crossroads nestled in the sandsculpted ravines of Inner Mongolia into a bleak boomtown of nearly 300,000 people. Day and night, long and dusty trains haul out coal to electric power plants and factories in the east, fueling China’s explosive growth.

Coal is big, and getting bigger. As oil and natural gas prices soar, the world is relying ever more on the cheap, black-burning mainstay of the Industrial Revolution. Mining companies are racing into Africa. Workers are laying miles of new railroad track to haul coal from the Powder River Basin in Wyoming and Montana.

And nowhere is coal bigger than in China.

But the explosion of coal comes amid rising alarm over its dire consequences for workers and the environment. An average of 13 Chinese miners die every day in explosions, floods, fires and cave-ins. Toxic clouds of mercury and other chemicals from mining are poisoning the air and water far beyond China’s borders and polluting the food chain.

So far, attempts to clean up coal have largely not worked. Technology to reduce or cut out carbon dioxide emissions is expensive and years away from widespread commercial use.

“Not very many people are talking about what do we do to live with the consequences of what’s happening,” said James Brock, a longtime industry consultant

in the Beijing office of Cambridge Energy Research Associates. “The polar bears are doomed – they’re going to museums. At the end of this century the Arctic ice cap will be gone. That means a lot of water rising, not by inches but meters.”

Burned since ancient times, coal dramatically increased in use during the Industrial Revolution, when it became fuel for the new steam engines, gas lamps and electrical generators. Worldwide demand for coal dipped at the end of the 20th century, but is now back up and projected to rise 60 percent by 2030 to 6.9 billion tons a year, according to the International Energy Agency.

Today, most coal goes to electrical power plants. In developing nations such as India, China and Africa, coal is the staple – and affordable – source of fuel with which families run their first washing machines and televisions. Worldwide electricity consumption is expected to double by 2030, the World Energy Council says.

In America, about 150 new coal-fired electrical plants are proposed over the next decade. In China, there are plans for a coal-fired power plant to go on line nearly every week. Emissions from these plants alone could nullify the cuts made by Europe, Japan and other rich nations under the Kyoto Protocol treaty, according to a report from the Woodrow Wilson International Center for Scholars in Washington.

In a developing country like China, coal is the backbone of the energy system.

Look at the port city of Shanghai, where the bitter tang in the air is not from salty sea breeze – it’s the smoke from coal-burning stoves in the suburbs used for cooking and heating. From the shacks of migrant workers on the edge of town to modern factories and skyscrapers, China’s biggest city is powered by coal. Even the ultramodern Maglev railway line runs on electricity from a coalfueled plant.

China mined a record 2.4 billion tons of coal in 2006, up 8.1 percent from a year earlier. But even that can’t keep boilers and blast furnaces stoked in an economy growing more than 10 percent a year. So China became a net coal importer for the first time this year. While Chinese authorities are closing down older, heavily polluting plants, they can’t keep up with a massive expansion in urban housing and industry and the coal that feeds them.

China is the world’s biggest consumer and producer of coal, but it’s far from the only one. U.S. coal production hit a record 1.2 billion tons last year, according to the National Mining Association, and is forecast by the government to rise 50 percent by 2030. Yet the United States rejected the Kyoto Protocol, arguing that the required emissions cuts could slow economic growth.

For another measure, look at the ticker on the Web site of St. Louis-based Peabody Coal Co., the world’s largest coal mining company, which tracks its growing sales second by second. Last year: 248 million tons sold. For

y tons. China’s Shenhua Group is hot on Peabody’s heels. On one day in June, a record 111 Shenhua coal trains left its mines in northcentral China, the company said.

Rising demand can be met because coal is the Earth’s most abundant fossil fuel, with reserves expected to last some 250 years – far longer than forecasts for petroleum. And whether in China, India, the United States or Europe, coal is available at home, away from the instability of the Middle East.

“The U.S. has under its own soil at least a 200-year supply of coal. China has a very long-term supply of coal,” Steve Papermaster, co-chairman of the energy committee of President Bush’s Council of Advisers on Science and Technology, told a recent conference in Shanghai.

For several years, cleaner burning natural gas appeared a promising substitute. But soaring prices and worries over the reliability of Mideast and Russian supplies have dimmed the promise of that option. Alternatives such as wind and solar power are getting cheaper but still can’t compete with coal.

Most experts believe that whatever the costs to the environment and public health, coal is with us to stay.

“The question is not about putting a line through coal and saying we’re not going to use it,” said Milton Catelin, chief executive of the London-based World Coal Institute, an industry association. “There’s a future for coal. The developing world will have to use coal. They need cheap energy to get ahead.”

The solution Catelin and others in the industry are pushing is clean technology, although they admit they are late to the game.

“The decade 1997-2007 was a lost decade” for clean coal technology, Catelin conceded. “We should have done much more. Now we’re playing catch-up.”

The need is clear. In the provincial steel town of Baotou, trucks heaped high with coal rumble into Shenhua yards, dumping their loads into huge sieves for sorting into various grades of quality and size. Wind gusts whip black soot into the sky, thickening the layer of smog from the city’s smelters.

The U.S. and Chinese governments are subsidizing the development of technology that converts coal to a clean-burning gas before it is burned. But such plants still emit ample amounts of carbon dioxide, notes Qian Jingjing, an expert with the Natural Resources Defense Council in New York and co-author of the report “Coal in a Changing Climate.”

She and many other experts believe coal can only be made environmentally sustainable through the more experimental technology of capturing carbon dioxide emissions and storing them underground.

A joint government-private project in the United States aims to build such a “zero emissions” plant by 2012. Separately, Xcel Corp. of Minneapolis, a major electric and natural gas utility, is studying building a carbon capture and storage power plant in Colorado.

Across the Atlantic, the European Union may require carbon capture and storage systems for all new coal-fired power plants, with a proposal expected by year end. The gas would be buried in aquifers, depleted coal mines or geological faults deep underground.

But the costs are daunting.

“It takes a lot of money since you have to go so deep,” said Brock of Cambridge Energy Research Associates. “There is not one commercial carbon capture and storage project yet. It’s yet to be proven.”

With such high costs, few utilities will embrace these technologies without a strong push or subsidy from government. The U.S. Congress is weighing several proposals, but their fate remains uncertain.

The degree of public support for such policies remains unclear. Consumers may balk at having to pay more for electricity from “clean coal” plants, either through higher rates or taxes.

But there is growing awareness of the problem. In both the West and India and China, traditional utilities and new players are investing in wind and solar power. A subsidiary of coal giant Shenhua is building a 200- megawatt wind farm in the waters off China’s east coast.

“The goal is to raise both efficiency and turn to renewables while backing out of coal in the process,” said Lester Brown, president of the Earth Policy Institute, an environmental think tank in Washington. “The question is, can we move fast enough?”

Meanwhile, in Jungar Qi, the house-sized mine trucks rumble on, rushing their multi-ton loads of coal to railways and coal yards. The biggest landmark in the city – the two huge smokestacks of its coal-fired power plant.