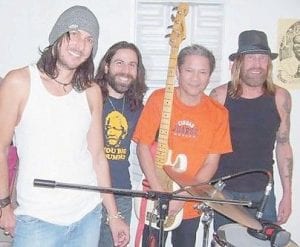 Worry Beads, a Los Angeles band featuring guitarists Mark Knight and Mark Tremalgia (both formerly of the platinum-selling band Bang Tango), will perform at Summit City in Whitesburg on Saturday night as part of a short tour to mark the release of the band’s

Wise County’s Folk Soul Revival will open Saturday’s show, which is scheduled to begin at 8 p.m. Admission is $8.

Known to many in Letcher County as the first national musical act to perform at Summit City, Knight and Tremalgia will return to Whitesburg a night after performing at the area’s newest music venue, The Skybox in downtown Hazard.

Knight says much of the music he is writing and performing today is influenced heavily by his and Tremalgia’s travels out of L.A.

“The South, especially in Kentucky, feels like home when we play there,” said Knight, who has played more than 30 shows in the region during the last three years. “Coming from Hollywood you never know what might inspire you — a town like Harrogate, Tennessee, the streets in Whitesburg or the view of the mountains coming into eastern Kentucky.” 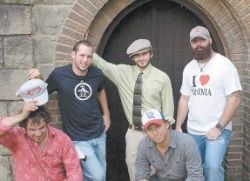 Folk Soul Revival, a popular band from Wise County, Va., will open for Worry Beads Saturday night at Summit City. The band posed for this publicity shot in front of the Graham Memorial Presbyterian Church in Whitesburg.

Iron Spitting Horse was recorded in Woodland Hills, California over the past three years and is full of guitar rock.

“The songs are ready for radio,” said Greg Napier, a rock music programmer with WMMT-FM in Whitesburg. “The album will come across well to anyone who truly loves rootsy, groove-rock music.”

Knight has also been busy working on his second solo album. Set for release next spring, Knight is joined on the effort by a cast of well-known musicians including Gov’t Mule drummer Matt Abts and bass guitarist Phil Chen, who has performed with Rod Stewart and Jeff Beck among many others.

More information about Worry Beads or Knight may be found at www.worrybeads.com or by visiting myspace.com/marknightmusic.