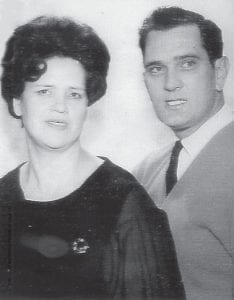 Everett Vanover and his wife Estelle are pictured at the Amelia Earhart Hotel in Wiesbaden, Germany on his 42nd birthday.

A few weeks ago when The Mountain Eagle hit the newsstands in Jenkins with the story I wrote about the ‘Beeliners,’ I got a call from Wayne Collins, a classmate of mine in the ‘40s, telling me his best friend, Joe Bukovich, flew with this famous outfit during World War II when it was first formed in Australia in April, 1942.

He was a crew member on our old C-47 Skytrain Transport nicknamed ‘Gooney Birds’ to drop supplies to the American and Australian troops in the jungles of New Guinea. This squadron also flew over the Himalayan Mountains along the India-Tibet border in Asia to supply our men in China fighting the Japanese.

This was the worst route to fly during World War II. We lost many aircraft with their crew.

I could not believe another World War II veteran from Jenkins was in the squadron that I was assigned to for 15 years. Joe and I have our names on the World War II Veterans Wall in front of the Jenkins Museum.

We are very proud to have served our country.