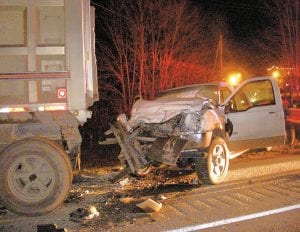 At least one person was seriously injured and had to be airlifted out of Letcher County for treatment of injuries he suffered after this pickup truck slammed into the rear of an 18-wheel coal truck that was parked on the shoulder of U.S. 119 at Mayking. Witnesses said the driver of this pickup was headed toward Whitesburg when he hit the truck, which had been parked in the same spot for two days. A med-evac helicopter landed on the highway to pick up the injured victim. Details of the accident, including the condition of the injured driver, were not made available by Kentucky State Police. (Photo by Chris Baker)