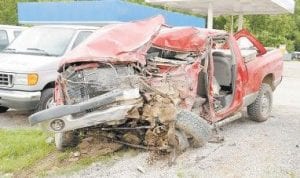 A Knott County man was critically injured after the pickup he was operating struck a power company service truck in Whitesburg Monday morning.

Slone said Caudill was taken by ambulance to the University of Kentucky Medical Center in Lexington, where he was being treated for some broken bones in his face and fractured ribs.

Slone said Fields was taken to the Whitesburg hospital and then flown to St. Mary’s Medical Center in Huntington, W.Va., where he remained in critical condition Tuesday night.