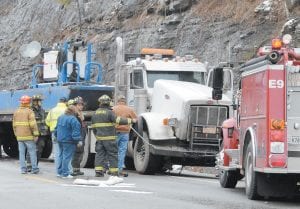 Rescue workers tend to a tractor-trailer involved in Saturday’s accident at Kona. (Photo by Chris Anderson)

Authorities say an x-ray technician who was killed in a traffic accident in Letcher County on Saturday may have fallen asleep before her vehicle crashed into a pickup truck and a tractortrailer.

Kentucky State Police Sgt. Keith Justice said Debra Lynn Sparkman, 50, of Littcar in Knott County, was heading south on US 119 at Kona around 11 a.m. on Dec. 18 when her tan GMC pickup truck veered into the opposite lane and sideswiped a black Ford Ranger being driven by Johnny Vanover of Dorton. Sparkman’s vehicle then collided head-on with a tractor-trailer truck hauling natural gas well drilling equipment being driven by Christopher Koon of West Virginia.

Sparkman was pronounced dead at the scene at 12:35 p.m. by Deputy Letcher County Coroner Robbie Campbell, who ruled the cause of death as massive head and chest trauma. Campbell said Sparkman may have fallen asleep behind the wheel on her way home from working at a hospital in Norton, Va.

Vanover and Koon were treated for minor injuries at the Whitesburg hospital and released.

Sgt. Justice said there were no signs of braking, steering maneuvers, or skid marks by Sparkman’s vehicle. He said road conditions played no part in the wreck.

State police, Kentucky Commercial Vehicle Enforcement officers, Neon Ambulance Service, and Jenkins Fire Department responded to the scene. The cause of the accident is still being investigated by Justice.

Funeral services for Sparkman will be held in Hindman today (Wednesday) at 11 a.m. at Hindman Funeral Services.

Sparkman is survived by her mother, Patricia Watts, a son, Jonathon Sparkman, a sister, Derhonda Johnson, and a granddaughter, Jaiden.

Travis Whitaker, a coworker and friend of Sparkman, said she will be greatly missed at Norton Community Hospital.

“I will miss my good friend, Deb, and I say with all honesty that Norton Community Hospital will never ever be the same without her,” he said.

Sparkman was an active member of United Steelworkers Union at the Norton hospital. She enjoyed reading, gardening and going on vacation with her friends.

Whitaker said Sparkman was known for having a big heart and helping people in need.

“Deb was one of the few people that I have met in my life that would willingly put the wellbeing of others before her own — no questions asked,” he said.

Whitaker said Sparkman also had a passion for helping animals.

“Not only did Deb help people who were less fortunate, she also went out of her way to help animals in need,” said Whitaker. “Deb did not expect anything in return for her deeds. Deb did right by herself and didn’t mind what others thought. She did deeds that she thought were right.”

“I’d say she spent a big portion of her paycheck on her animals,” said Meade.

Kenneth Combs, owner of Combs Pet Kingdom at Isom, said Sparkman took care of any pet that came her way.

Combs and his wife, Debra, were close friends of Sparkman and are trying to find good homes for all of the pets under her care. Anyone interested in adopting any of her cats or dogs can stop by Combs Pet Kingdom or call 633-4130.