Wreck on bypass fatal to woman, 57 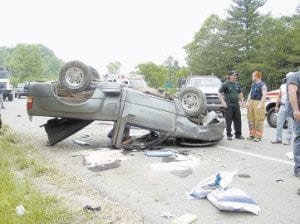 ILLNESS SUSPECTED IN CRASH – Tilitha Campbell died when the pick-up truck she was driving overturned on the Whitesburg Bypass. Authorities believe she might have suffered a heart attack before the crash.

Officials say a heart attack could be the cause of death of an Ermine woman who died last Thursday afternoon in a car wreck on the Whitesburg Bypass.

Tilitha Holbrook Campbell, 57, was traveling southbound in a 1996 Ford Ranger on KY 15 on the Whitesburg Bypass on May 24 when she veered off the roadway striking an embankment on the southbound side, then overturning, according to police.

Campbell was transported by ambulance to the Whitesburg Appalachian Regional Hospital where she was pronounced dead by Letcher County Coroner John Cornett.

“We figure she had some sort of medical problem to cause the accident, possibly a heart attack. She does have a history of heart problems,” said Cornett.

Cornett said the blunt force trauma from the accident could also be a contributing factor to the cause of death.

“Preliminary investigations show medical conditions appear to be a contributing factor in the cause of the collision as well as Mrs. Campbell’s death,” said Lieutenant M.K. Terry, of the Letcher County Sheriff’s Department.

Terry said no seat belt was in use.

The case is still under investigation by Terry.

Campbell, the daughter of the late Booker and Sarah Holbrook, is survived by her daughter, Melissa A. Niece of Whitesburg; four brothers, Charles Holbrook of Dry Fork, David Holbrook of Kingdom Come, Henry Holbrook of Mayking and Bert Holbrook of Whitaker; and a sister, Anna Cornett of Mayking.

She was preceded in death by a sister, Opal Cornett, and a brother, J.B. Holbrook.

Funeral services were held May 27 at Everidge Funeral Home. Burial was in the Whitaker Cemetery at Dry Fork.