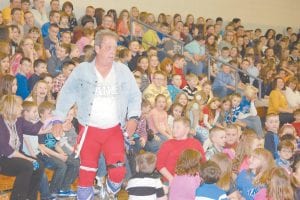 Professional wrestler Rockn Roll Marty Gibson knows how drug abuse can ruin lives and is trying to pass that information along to local school children.

Gibson, a Cumberland resident who has been involved in organized wrestling for several years, was at Cowan Elementary School last week warning students about the dangers of drugs. He will return to Letcher County on April 18 to talk with students at Letcher Elementary School.

Gibson said his brother had enough crack cocaine in his system to kill three men when he overdosed and died in 2003.

“I reached my hand out to my brother so many times,” said Gibson. “…That was the most emotional and stressful time of my life.”

Gibson, who said he has been wresting since the late 1970s, recently signed a contract with Traditional Southern Wrestling, a new wrestling organization based in Corbin, Ky., that is scheduled to debut in London on June 22.

Gibson said he has seen drugs destroy several pro wrestlers, but knows some who have overcome drug addiction.

“The drug problem right now has gotten so bad that the stealing, break-ins and murders have gotten out of hand,” he said. “It’s going to take all of us working together to stop drug abuse.”

Gibson says the best way to influence children to stay away from drugs is to talk to them during school assemblies. He has been involved in anti-bullying and antidrug programs since 2001.

Gibson and his wrestling friend “Wild Willie” talked about both drugs and bullying to the Cowan students on March 18.

Gibson told the children that bullies are often young criminals who start their life of crime by taking milk money and end up stealing higher priced items as they get older and eventually end up in the penitentiary.

Both Gibson and Wild Willie appeared in full wrestling gear with Gibson’s wrestling theme music playing in the background.

“We need to be good role models,” said Wild Willie, a pastor from Barbourville. “Our children need to be made aware they can be anything they want to be.”

Gibson said many children who run into problems and often don’t have anyone they can talk with. He encouraged Cowan students to confide in teachers and law enforcement.

“A teacher is one of your best friends,” he said. “Cops have hearts. State troopers will do anything they can to help you.”

Gibson urged students at Cowan to set goals and work to attain them. He said he wanted to be a wrestler at a young age and began training in high school.

Gibson is a “high flyer” in the wrestling ring, meaning he depends on several aerial and gymnastic moves to gain an advantage over his opponent. He said he has suffered several injuries as a result of his style, including broken bones and one injury that required 18 stitches across the back of his head.

Gibson said he suffered broken ribs when a wrestler named Earthquake kneed him while attempting a stunt in Harlan in 1999. Despite the painful injury, he said he was in St. Louis, Mo., performing the next night.

“If you get hurt and don’t show up to the next show, they’ll stop booking you,” he said. “The biggest thing in wrestling is you have to present yourself.”

Gibson, who refers to himself as an independent wrestler, has wrestled for Jim Crockett Promotions, which was a member of the National Wrestling Alliance (NWA). He also has wrestled for World Championship Wrestling (WCW) and Total Nonstop Action (TNA) Global Impact. He said he spent the last year wrestling with World Wrestling Entertainment (WWE) SmackDown.

“That will be a real good match,” he said.