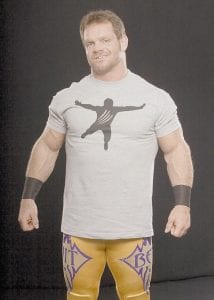 When Chris Benoit, above, killed his wife and child last month he became the latest of many pro wrestlers who have died under strange circumstances before the age of 50. (AP)

Everything is planned. The high-flying moves. The outlandish story lines. The crackpot characters.

One thing isn’t in the script: the staggering number of pro wrestlers who die young.

Chris Benoit was the latest, taking his own life at age 40 after killing his wife and son in a grisly case that might be the blackest eye yet for the pseudosport already ridiculed as nothing more than comic books come to life, a cult-like outlet for testosterone ragin’ young males to cheer on their freakishly bulkedup heroes.

But the tenacious, grim-faced grappler known as the “Canadian Crippler” was hardly alone in heading to an early grave.

The very same weekend Benoit killed his family, the body of old tag-team partner Biff Wellington (real name: Shayne Bower) was found in his bed, dead at 42. A couple of weeks ago, former women’s champion “Sensational” Sherri Martel passed away at her mother’s home in Alabama. She was 49.

And on it goes.

Mike Awesome (Michael Lee Alfonso in real life) was found hanged in his Florida home in February, the apparent victim of a suicide at 42. “Bam Bam” Bigelow was 45 when a lethal cocktail of cocaine and benzodiazepine, an anti-anxiety drug, stopped his already ailing heart in January.

And on it goes, dozens and dozens of wrestlers meeting a similar fate over the past two decades. Some died with drugs flowing through their veins. Others tried to clean up but belatedly paid the price for their long-term abuse of steroids, painkillers, alcohol, cocaine and other illicit substances.

How many more must pass through the morgue before everyone stands up and shouts: Enough’s enough?

“From my 17 years in the business, I know probably 40 to 45 wrestlers who dropped dead before they were 50,” said Lance Evers, a semiretired wrestler who goes by “Lance Storm” when he’s in the ring. “It’s an astronomical number.”

Then, he added in a voice tinged with anger and sadness, “I’m sick and tired of it.”

Over the years, there are been numerous proposals to put wrestling under some sort of oversight, be it at the state or federal level. Those ideas usually have fallen on deaf ears, largely because the powers-that-be, be it the old-time regional promoters or WWE owner Vince McMahon, the guy who largely controls the sport today, don’t want the government telling them how to run their business.

Jim Wilson, who parlayed pro football into a ring career, says he was blackballed when he began pushing for a wrestler’s union. Since then, he has written a book about his experiences and kept up the push to rein in those who govern the sport.

Although Wilson’s battle often has been a lonely one, he says Benoit’s death might reinvigorate the cause.

A union could be a useful tool for cleaning up the sport. It might lead to a pension plan, improved benefits, more stringent health and safety guidelines and a revamped pay structure that would allow wrestlers to spend more time at home without risking a pay cut.

Now, most top wrestlers get a guaranteed salary, but the bulk of their income is based on how often they compete. That leads some to feel they must get in the ring while injured, often with the aid of painkillers and other numbing chemicals.

And much like rock stars, plenty of wrestlers have fallen victim to excessive partying, alcohol and drug dependency, and marital problems during grueling stints on the road.

“My longest run was 79 days in a row without a day off,” said Joe Laurinaitis, the wrestler known as Road Warrior Animal and father of Ohio State football star James Laurinaitis. “It’s not as bad now. They’ve got good guys running the WWE. Still, we need to take a look at it when things like this (the Benoit murder suicide) are happening. Guys are still overworked.”

That’s why Wilson’s calling for Congress to hold hearings on the wrestling industry, much like it investigated doping in professional sports and just recently heard from ex-NFLplayers who believe they’re being shortchanged on their pensions.

“In those other sports, they aren’t dropping like flies like they are in the wrestling business,” Wilson said. “Now is the time to push for legislation nationally.”

He’s already spoken with U.S. Sen. Johnny Isakson (R-Ga.), who instructed his staff to begin gathering information on the issue to determine if a hearing before the Health Committee might be warranted.

“I’m not going to start speculating on federal regulation of wrestling,” he said. “The issue is anabolic steroids, which are a significant problem and are known to cause significant difficulties. It’s a health issue that’s appropriate for us to discuss, regardless of the profession.”

Steroids and other musclebuilding drugs long have been an accepted part of the wrestling culture, allowing the biggest names to pump up to ungodly proportions that wouldn’t be possible through natural means.

Granted, nobody comes right out and tells a wrestler he or she should take steroids. But all one has to do is attend a match in person or watch one on TV to realize some of these physiques just aren’t plausible without help from a syringe.

“Somebody says you need to put 25 pounds on your upper body,” said Larry DeGaris, who teaches sports marketing at the University of Indianapolis and moonlights on the independent wrestling circuit as “The Professor” Larry Brisco. “Well, if you have an athletic background and have been around sports for a while, you know there’s only one way to do that. Nobody needs to tell you. It’s just a tacit understanding.”

Steroids were found in Benoit’s home, though investigators

of his wife, Nancy, and their 7-year-old son.

World Wrestling Entertainment, which employed Benoit and holds a virtual monopoly grip on the industry, was quick to point out that this tragedy – apparently carried out over an entire weekend – doesn’t come with the classic signs of ‘roid rage, the violent, unpredictable outbursts that can be caused by someone who abuses steroids.

However, It was learned through court papers released this week that Benoit bought injectable steroids excessively. Dr. Phil Astin prescribed a 10-month supply of anabolic steroids to Benoit every three to four weeks between May 2006 and May 2007, a Drug Enforcement Administration agent said in an affidavit made public July 2.

There’s no justifying that happened at the Benoits’ suburban Atlanta home last month.

Alvarez, who covers the sport extensively for the Web site www.wrestlingobserver.com, has some inkling of the demons that might have overtaken the wrestler.

He said Benoit never got over the 2005 death of Guerrero, a former WWE champion and four-time tag-team titleholder who was 38 when he died of a heart attack, perhaps caused by the alcohol and drug abuses that friends thought he had beaten.

“Chris’ closest friend in the world was Eddie Guerrero,” Alvarez said. “He could cry to him. He could tell him everything. After Eddie died, I talked to Chris. He was broken man.”

Last year, another of Benoit’s wrestling buddies, 263-pound Mike Durham (known in the business as Johnny Grunge), died at 39 from complications cause by sleep apnea, a condition that often affects larger people such as wrestlers and football players.

“It was about this period of time that people started noticing weird behavior, paranoid behavior, which would indicate (Benoit) was using a lot of drugs,” Alvarez said. “He was alone. He was on the road a lot, having to perform at a high level, having to look a certain way. I think the drug use escalated, and his whole world basically fell apart.”

Laurinaitis knows what a lethal potion it all can be.

His friend since childhood and longtime tag partner, Road Warrior Hawk (Michael Hegstrand), died from a heart attack in 2003. Just 46, Hegstrand had battled alcohol and drugs, in addition to using steroids, Laurinaitis said.

“I used to watch him sometimes and just shake my head. I would think, ‘Oh my God, what in the world is he doing? Why is he doing that?'” Laurinaitis said. “I saw quite a few guys go down that path.”

All dead before they were 50 – and that’s just a sampling of an ever-growing list.

It doesn’t take someone who can distinguish between a full nelson and a sleeper hold to know that’s far too many wrestlers dying far too young.

“It’s gotten to the point that just about every show in the country is starting with a ten-bell salute,” said DeGaris, the professor and wrestler, referring to the traditional farewell to a fallen competitor. “You kind of look at some of the old pictures, and you’re the last man standing.”