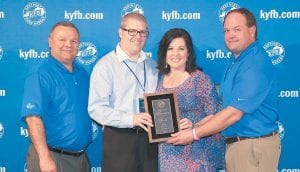 Mark Wright, agency manager for Kentucky Farm Bureau Insurance in Letcher County, has been named 2015 Agency Manager of the Year for District Five. This is the sixth time Wright has received the honor. The award was presented during the company’s 62nd annual sales conference, held in Louisville on March 21.

The District Five Agency Manager of the Year award recognizes the agency manager who displayed the highest level of excellence in overall sales production, satisfactory loss-ratio, service to policyholders and an affirmative attitude. District Five consists of agencies in Letcher and 23 other Kentucky counties.

Born in Virginia, Wright moved to Kentucky and attended Morehead State University where he earned bachelor’s degrees in history and secondary education. He contracted as an agent with Kentucky Farm Bureau in November 1995 and became agency manager of the Letcher County Agency in February 2001.

Wright is also the past recipient of Kentucky Farm Bureau’s Rookie of the Year, Sophomore of the Year, Agent of the Year and Agency Manager of the Year awards. Outside of the office, he is very active in church and youth activities, and coaches a local baseball team. Mark and his wife, Ellena, have a daughter, Chloe.