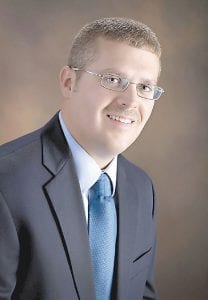 Mark Wright, agency manager of the Letcher County Agency for Kentucky Farm Bureau Insurance, has been named 2012 Agency Manager of the Year for District Five. This is the third consecutive year that Wright has won this award.

The District Five Agency Manager of the Year award recognizes excellence in overall sales production, satisfactory loss-ratio, service to policyholders and an affirmative attitude. District Five is a 24-county region.