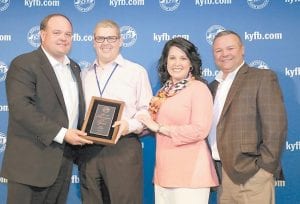 Mark Wright, agency manager for Kentucky Farm Bureau Insurance in Letcher County, has been named 2015 Agency Manager of the Year for District Five. This is the fifth time Wright has received the honor. The award was presented during the company’s 61st annual sales conference, held in Louisville on March 29.

Born in Virginia, Wright moved to Kentucky and attended Morehead State University where he earned bachelor’s degrees in history and secondary education. He contracted as an agent with Kentucky Farm Bureau in November 1995 and became agency manager of the Letcher County Agency in February 2001.

Wright is also the past recipient of Kentucky Farm Bureau’s Rookie of the Year, Sophomore of the Year, Agent of the Year and Agency Manager of the Year awards. Outside of the office, he is very active in church and youth activities, and coaches a local baseball team. He and his wife, Ellena, have a daughter.

Wright heads the list of a well-established network of nearly 400 Kentucky Farm Bureau agents statewide. The company, founded in 1943, has offices in all of the Commonwealth’s 120 counties. Farm Bureau markets a wide variety of insurance lines, from homeowner’s and automobile coverage to life and health insurance and retirement planning. For more information about Kentucky Farm Bureau Insurance, visit kyfb.com<www.kyfb.com&gt;.