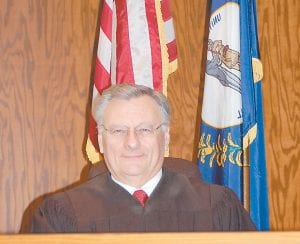 Letcher Circuit Judge Sam Wright has thrown his hat in the ring for the office of Supreme Court Justice in the 22-county Seventh District of Kentucky. (Photo by Sally Barto)

Letcher Circuit Judge Sam Wright has decided to seek a seat on the state’s highest court.

One of seven seats on the Kentucky Supreme Court became vacant earlier this month when former Justice Will T. Scott of Pikeville resigned before announcing his intent to run for the Republican nomination for governor.

Gov. Steve Beshear will choose Scott’s successor from the committee’s recommendations. Wright, 59, said he has no intention of applying for the short-term appointment.

“I’m only going to do it if I’m elected,” said Wright. “Then the voters have selected you. I think that is a very important thing.”

Wright drove to Frankfort January 16 and filed candidacy papers around 4 p.m. with the Kentucky Secretary of State’s office.

Kentucky Court of Appeals Judge Janet Stumbo of Prestonsburg also filed candidacy papers last Friday. Stumbo, 60, said in a statement that she believes her 23 years of experience as both a Supreme Court justice and Court of Appeals judge, along with her experience as a practicing attorney, make her uniquely qualified for the position.

If only two candidates file in the nonpartisan race, the winner will be decided in a November election. If three or more candidates file, a primary election will be held in May and a general election in November.

Whoever is elected will serve out the remainder of Scott’s term, which will end in 2020. A full term on the Kentucky Supreme Court is eight years.

Wright, who has held the office of Letcher Circuit judge for 22 years, said he wrestled with the idea of running for Supreme Court justice before committing.

“It’s been on my mind for a number of years, except I love what I do,” said Wright. “I’ve really been going back and forth.”

Wright said if elected he could not only make a difference in Letcher County, but statewide.

“I learned long ago that law was much more than paper,” said Wright. “It affects people’s lives in many ways.”

Wright points to his work in helping organize Letcher County’s drug court program as an example of the hard work he would do as Supreme Court justice.

“Through drug court I have witnessed firsthand the positive influence courts can have in turning lives around, bringing families back together and benefiting the public,” said Wright. “The drug problem is an epidemic in our state and the nation. As Supreme Court justice, I will make every effort to improve and expand our drug courts.”

Wright was graduated from the University of Kentucky and the UK College of Law. Wright was a practicing attorney and then Letcher District judge for a year before becoming judge of the 47th Circuit.

He is the son of S.T. Wright II and the late Gladys Hall Wright, originally of Floyd County. Reared in Thornton, Wright worked evenings and weekends at his parents’ general store. His mother operated a beauty shop and his father was a parole and probation officer who supervised operations in an 11-county area.

Wright worked at a coal tipple during the summer months of his college years, picking rock from the coal that was running on the conveyor belts. He said the work gave him a firsthand appreciation of the coal industry, not just as a vital part of the region’s economy, but for the individual worker in the coal mining industry as well.

“The guidance I received from my family as well as my experiences during my youth provided the cornerstone of my understanding of people and led me to seek ways in which I could make a difference in people’s lives,” said Wright.

Wright previously owned and operated retail and real estate businesses, which he said gave him a unique understanding of the challenges facing eastern Kentuckians and the people of the Commonwealth as a whole.