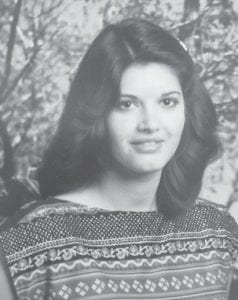 Oh, I so wish I could have been at Little Cowan Primitive Baptist Church Sunday where The Masters Harmony sang. For those of you that don’t know, this is where Dad and Mom took us for Sunday school and church three Sundays out of the month. We went to Marlowe Mountain Chapel one Sunday a month. We loved all the Cowan people, especially our Sunday school teachers. We were all involved in the Christmas plays, even Daddy. I remember once he was a shepherd, once he was a wise man, and once he even portrayed Joseph. He had a really hard time remembering lines though, so if he was supposed to say anything he had to have a prop with the words written on it.

Speaking of our Sunday school and its teachers, I found this piece that Mom wrote for a celebration that was held at Cowan Elementary School for Beulah Gibson Caudill in the early 70’s. Each one of us kids wrote something, too. But, we didn’t keep ours. I found Mom’s while going through some of her keepsakes and wanted to print it here. 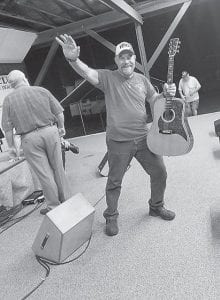 “It has been one of God’s greatest blessings for me to have known Beulah Caudill. She has been a light for anybody to follow, if they want the right way to go.

“Also she has had a great influence on my children as she has taught them in Sunday school. I believe God has given her all these many years because she has done a great work for him. And I dearly hope she will have many more.

“When Bernard Banks and the Primitive Baptist people came to Marlowe and started a church there, my dad and mother, three sisters, one brother and myself got saved there. So you see, that God had a great people working for him. We love you Beulah.”

I just wonder if we had all the people together that were influenced by Beulah, how many there would be. Her sisters Thelma Gibson Banks, Mattie Vern Gibson Banks, Minnie Vae Gibson Banks, Geneva Gibson Caudill, and Virginia Brown were also major in influencing many people. One of the preachers at Little Cowan Primitive Baptist and Marlowe Mountain Chapel, Bernard Banks, was married to her sister Minnie Vae.

We have so many wonderful memories of this family. I wish they could have all been there and heard The Masters Harmony sing Sunday.

I forgot to get the Senior Citizens’ birthdays for the month of November from Carmen Brock today, so I will have to post those next week. We have two sisters in our family with birthdays this month and also lots more from the Pennington family. Nov. 2 is my sister, Lucille Tacket Graves’s birthday. You wouldn’t know from looking at her, but she turned 60.

Just a word or two about her when she was growing up; she was a climber as a toddler. I don’t really remember her doing this, but Daddy used to say there wasn’t a piece of furniture in the house she hadn’t climbed onto. Even found her one day on top of the refrigerator.

She was always so puny and because of her we had to take worm pills. They were so big and so hard to swallow it would almost gag me to take them. So many times I would pretend I took mine, but I really kept them in my hand and did something else with them.

Come to think of it, I think it might have been her fault we had to drink castor oil. Daddy would “holler” at us to come down the basement one at a time and made us swallow a spoonful. Don’t remember what that was for, but it had to do with Lucille being sickly.

I remember the doctor telling Mommy to make her be the first one to the table and the last one to leave and wishing they had told them that about me.

Ok, enough reminiscing. We had some wonderful news from a former Marlowe resident and one of Mom’s good friends, Bertha Paige Dye. She had told us about a month ago she was having problems with her esophagus and they were running tests to see what was wrong.

Well, she messaged on Facebook today and said all the tests had come back and there was nothing wrong. Praise God for answering those prayers. Another answer to prayers, Earle Bone, our friend from the rec center who’s battling cancer, came to the rec center Monday, and hopes to be able to continue. I didn’t get to see him but I hope to soon.

I just saw some wonderful news on Facebook. Denise Yonts was elected Superintendent of Letcher County Public Schools. We think she will make a wonderful superintendent. She and her husband Rocky Yonts are members of the church at Letcher Independent Baptist. I’m sure you will be reading more about this in the rest of the paper.

Please remember my Aunt Linda Hall in your prayers. She is having lots of problems out of her feet from complications of diabetes. Also remember our precious friend, Faye Martin. She’s had problems with her hearts rhythm.

Also, keep Mom in your prayers as we start cardiac rehab this week. And, then don’t forget all those who have lost ones recently. I know this year will be the first year without my mother in-law. It will be really, really hard for us, especially my husband and his three brothers. Also, remember my pastor, Bill Jones and his wife Sandy.

Ending here once again with Oma’s plea. Please be in church Sunday morning and if your church has services Sunday night or throughout the week, God wants you there then, too.