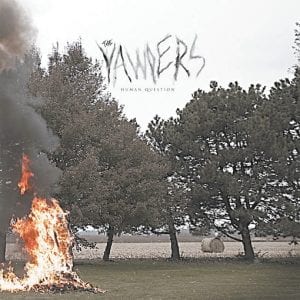 Denver trio The Yawpers are intense and dynamic on “Human Question,” a rambunctious album tracing some of the many paths that rock ‘n’ roll takes through its deep foundations in the blues.

The band’s fourth album encompasses from approximations to white noise and Zeppelin-esque grooves to folky sentiments and indie jangle in R.E.M./Replacements mode. It’s being presented as lead singer Nate Cook’s “therapy” record, a more intimate approach than their previous release.

Where “Boy in a Well,” from 2017, explored the story of a semi-abandoned newborn in World War Iera France, “Human Questions” often sounds like the rush and chaos of present times.

With exceptions, Cook’s traumas seem to be projected on the world, not kept within. “Carry Me,” an epic track that goes from whispers to screams, a squawking sax solo and a quiet end, is one of the most personal and straightforward, if close to unhinged — “Lie to me, it’s all I need/Tell me you love me … And you’ll carry me through.”

The acoustic center of “Man as Ghost” camouflages an appealing combination of tortured and relaxed, with one of the album’s most haunting, schizophrenic lines — “I’m neighbor with another man/who moves where ever I decide to live.”

The title track is another enigmatic highlight echoing the early ‘70s, while “Dancing on My Knees,” possibly about coming to terms with divorce, is bluesy and visceral though only half as much as “Forgiveness Through Pain.”

Respite comes with the final two tracks, “Can’t Wait,” whose title evoking a Replacements’ classic is not the only similarity, and “Where the Winters End,” which could be a rewrite of Bob Dylan’s “Forever Young” in elegy mode.