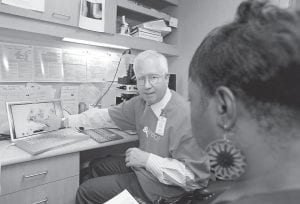 In this photo provided by College of American Pathologists, a pathologist explains a Pap test slide to a patient in Minneapolis, Minn.

Annual cancer tests are becoming a thing of the past. New guidelines out for cervical cancer screening have experts at odds over some things, but they are united in the view that the common practice of getting a Pap test every year is too often and probably doing more harm than good.

A Pap smear once every three years is the best way to detect cervical cancer, the U.S. Preventive Services Task Force says. Earlier this month, it recommended against prostate cancer screening with PSA tests, which many men get every year.

“The more tests that you do, the more likely you are to be faced with a falsepositive test” that leads to unnecessary biopsies and possible harm, said Dr. Michael LeFevre, one of the task force leaders and a professor of family and community medicine at the University of Missouri. “We see an emerging consensus that annual Pap tests are not required for us to see the benefits that we have seen” from screening, he said.

Those benefits are substantial. Cervical cancer has declined dramatically in the United States, from nearly 15 cases for every 100,000 women in 1975 to nearly 7 per 100,000 in 2008. About 12,200 new cases and 4,210 deaths from the disease occurred last year, most of them in women who have never been screened or not in the past five years.

New proposed guide- lines from the cancer society and other groups say using Pap smears together with tests for HPV, the virus that causes cervical cancer, every three to five years is the preferred way to screen women ages 30 to 65. But the government task force concluded the evidence is insufficient “ to assess the balance of benefits and harms” of that.

Instead, more lives probably could be saved by reaching women who are not being adequately screened now, the task force says.

And despite what many people suspect, cost has nothing to do with the task force’s stance, its leaders said.

“We don’t look at cost at all. We really are most concerned about harms,” said Dr. Evelyn Whitlock of Kaiser Permanente Northwest’s Center for Health Research in Portland, Ore., who led an evidence review for the task force.

Here are some questions and answers about the cervical cancer guidelines.

Q. At what ages should screening start and end?

A. The task force recommends against screening women under 21 or older than 65. Very few cervical cancer cases occur in women under 21, so the old advice to start screening three years after the age of first intercourse has been changed. HPV tests are only approved for women after age 30 because transient infections that don’t pose a cancer risk are more common at younger ages.

“ We should not be screening teenagers. It’s not helping, it’s not finding any more cancers and it’s creating way too many harms for them,” said Debbie Saslow, the cancer society’s director of breast and gynecologic cancer.

Q. Should anyone else not be screened?

A. Women who have had their cervix and uterus removed should not be tested, but check with your doctor — not all hysterectomies are complete; some leave the cervix.

Q. What does screening cost?

Q. Will insurance pay for HPV tests since the government panel doesn’t endorse them?

A. Probably. They are included in preventive services that other federal advisers say should be covered under the Affordable Care Act, and the government has continued to pay for mammograms for women who want them even if it is sooner or more often than the task force recommends.

Q. What if I’ve had the HPV vaccine?

A. Doctors don’t know how the vaccine will affect HPV test results or how long the vaccine lasts, so women should still be screened for cervical cancer if they are within the recommended screening ages.