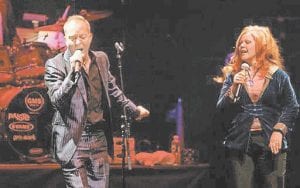 It’s been 15 years since the last B-52s album and two decades since songs like “The One I Love” and “It’s the End of the World As We Know It (And I Feel Fine)” transformed Athens, Ga.’s R.E.M. from college radio darlings to international rock stars.

Since then, hardcore music lovers have remembered the college town 70 miles east of Atlanta fondly as a rock ‘n’ roll hotspot, but haven’t seen it produce another multi-platinum musical breakthrough.

“Athens is a bit of a mystery to a lot of people,” said Alan Cross, program director of 102.1 The Edge in Toronto who hosts “The Ongoing History of New Music,” a weekly show focused on alternative rock. “Being where it is, it’s not exactly on the beaten track for a lot of people. However, it does have that mythical quality about it.”

But back in Athens, musicians and their fans say the lack of a new chart-topper doesn’t accurately represent a still-bustling scene where it’s believed there are more bands, per-capita, than anywhere in the world.

In a town of roughly 100,000 people, Athens – home of the University of Georgia and just south of the foothills of the Blue Ridge mountains – has an estimated 500-plus music groups. At that ratio, metro Atlanta would have about 20,000 rock bands and New York City would have more than 40,000.

“On any night of the week three or four or five venues are having several bands play,” said Vanessa Hay, whose band Pylon was an influence on R.E.M. in the early ’80s and who, at 51, still occasionally reunites with the group or sings with other acts. “There are just hundreds of bands here and there are just lots and lots of new acts starting up all the time.”

That scene will be on display this week (June 20-24) at AthFest, an annual showcase of local music and art that has grown over the past decade from a local get-together to an event that draws thousands of visitors from across the country and overseas.

Founder Jared Bailey said the festival, which started on the courthouse steps 10 years ago with 60 bands, will this year feature about 200 groups – almost all from Athens.

“We do have a really special community here with a lot of talent,” said Bailey, co-creator of Athens’s Flagpole magazine and a former owner of the town’s 40 Watt Club. “We’ve had people say, ‘You could make AthFest so much bigger if you brought in out-of-town bands.’ But that’s not what we’re about.”

A Flagpole music directory lists roughly 600 groups or artists playing out of Athens, from A Shallow Imprint, a group bluntly tagged “4 fat guys that rock,” to R.E.M., jokingly described as a “power trio” that performs “rock covers and originals.”

Bailey said that while about 100 of those are probably side projects, one-off efforts or garage bands, that leaves around 500 legitimate acts.

Past performers at AthFest have included Grammy winners John Mayer – whose parents live near Athens and who played twice before hitting the charts with songs like “Why Georgia” and “Your Body is a Wonderland” – and Jennifer Nettles, a Georgia native who fronts the hit country act Sugarland.

This year, Perpetual Groove, The Whigs and the Drive-By Truckers will headline outdoor stages on Friday, Saturday and Sunday nights.

“In Georgia, probably most of the artistic and eccentric and creative and interesting people gravitate to UGA,” said Fred Schneider of The B-52s, whose group returned to its roots in Athens last month to record their first album in 15 years. “It’s an easy place to live, prices are reasonable and there’s a lot to do and see.”

Schneider said he was happy to find a still-vibrant music scene when he returned to Athens for the first time in years.

“I saw so many great new bands and bands from all over the country playing in town,” said Schneider, who singled out irreverent bubblegum duet Cars Can Be Blue and their mates on local independent label Happy Happy Birthday to Me. “It’s funny how things come full circle.”

While Athens groups like Widespread Panic, the Drive-By Truckers and Of Montreal tour internationally and a handful of others have garnered airplay on college radio across the country, observers say it’s unclear whether another R.E.M. will emerge.

And for most locals, that’s fine.

“They’re not exactly snobbish, but you’re not going to get the support from your fellow musicians, or the followers of the scene, if you go and push yourself” as the next big thing, Hay said. “You’re going to get some community backlash. It might not be anything said, but you won’t get the support.”

But they add that groups like R.E.M. never set out to be international superstars either.

“You can never predict,” Schneider said. “All I can say is that passion for creating new music in every vein and genre is still there.”

On the Net: AthFest, http:// www.athfest.com/