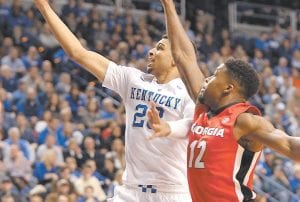 Kentucky’s Jamal Murray, left, shot under pressure from Georgia’s Kenny Gaines during the first half of UK’s 82-48 win over Georgia in Lexington on Tuesday night. (AP Photo/James Crisp)

The Letcher County Middle Schools Boys’ Basketball tourney was hosted recently by Arlie Boggs Elementary School. All the games except the A-team final round were played at Fleming Neon.

Good games played at every level of the tourney. Congratulations to the Whitesburg Yellowjackets C team, which took home the championship over Letcher by hitting a three-point basket at the buzzer to win by one point. The B team championship was won by the Fleming-Neon Pirates, who gave Whitesburg its only loss in the tournament.

On Sunday, January 31, the action moved to Letcher Central, where the first game was a consolation game between the Cowan Bulldogs and the Fleming-Neon Pirates. This was a very quick moving game with a lot of good shooting. The score stayed close throughout the game, as Cowan got out to a seven point lead. The Pirates used five three-point buckets in the first half to lead 20-24 at halftime. In the third quarter the Pirates extended that lead to as much as seven points, but the Bulldogs made a late run in the fourth quarter to tie the game with a three-point basket by Kenton Combs with just seconds left to force overtime.

In the overtime, Cowan continued to control the game, winning 52-50. This was a game that saw 17 three-point baskets made between the two teams.

Leading the scoring for the Pirates was Ryan Lebrun with 22 points, Manny Gibson had 11, Joby Johnson added seven points, as Nick Mason and Dalton Vance also scored five points each.

The championship game between Letcher and Whitesburg started much slower and looked like Letcher may win easily, but the Jackets kept fighting. Letcher led the entire first half and took a 15-11 lead into the locker room.

Starting out, the second half was more of the same as Letcher controlled the tempo of the game and extended their lead to ten points after three quarters of play. But the Jackets would battle back, they begin controlling the tempo with the help of a full court press, causing several Letcher turnovers as the Jackets got their first lead of the evening with 1:50 left in the game.

The Yellowjackets then outscored the Eagles 19-7 in the final quarter to take home the championship trophy. The final score 33-31.