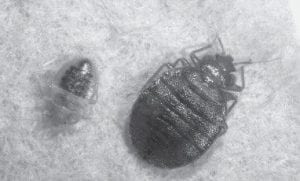 Doesn’t seem so bad in a cheerful bedtime rhyme, but it’s becoming a really big problem now that the nasty critters are invading hospitals, college dorms and even swanky hotels.

With the most effective pesticides banned, the government is trying to figure out how to respond to the biggest bedbug outbreak since World War II.

Bedbugs live in the crevices and folds of mattresses, sofas and sheets. Then, most often before dawn, they emerge to feed on human blood.

Organized by one of the agency’s advisory committees, the two-day conference drew about 300 participants to a hotel in Arlington, just across the Potomac River from Washington. An Internet site notes that the hotel in question has had no reports of bedbugs.

One of the problems with controlling the reddish-brown insects, according to researchers and the pest control industry, is that there are few chemicals on the market approved for use on mattresses and other household items that are effective at controlling bedbug infestations.

Unlike roaches and ants, bedbugs are blood feeders and can’t be lured by bait. It’s also difficult for pesticides to reach them in every crack and crevice they hide out in.

“It is a question of reaching them, finding them,” said Harold Harlan, an entomologist who has been raising bedbugs for 36 years, feeding them with his own blood. He has the bites to prove it.

The EPA, out of concern for the environment and the effects on public health, has pulled many of the chemicals that were most effective in eradicating the bugs in the U.S. At the same time, the appleseed-sized critters have developed a pesticide resistance because those chemicals are still in use in other countries.

Increasing international travel has also helped them to hitchhike into the U.S.

“One of our roles would be to learn of new products or safer products. … What we are concerned about is that if people take things into their own hands and start using pesticides on their mattresses that aren’t really registered for that, that’s a problem,” said Lois Rossi, director of the registration division in the EPA’s Office of Pesticide Programs.

The EPA is not alone in trying to deal with the problem. An aide to Rep. G.K. Butterfield, D-N.C., says the congressman plans to reintroduce legislation next week to expand grant programs to help public housing authorities cope with infestations.

The bill will be called the “Don’t Let the Bedbugs Bite Act.”

“It was clear something needed to be done,” said Saul Hernandez, Butterfield’s legislative assistant.

Bedbugs are not known to transmit any diseases. But their bites can cause infections and allergic reactions in some people. The insects release an anticoagulant to get blood flowing, and they also excrete a numbing agent so their bites don’t often wake their victims.

Those often hardest hit are the urban poor, who cannot afford to throw out all their belongings or take other drastic measures. Extermination can cost between $400- $900.