Yoakam will make 24th appearance on ‘The Tonight Show’ 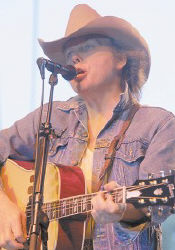 Dwight Yoakam will make his 24th appearance on “The Tonight Show with Jay Leno” this week, breaking the record for most musical performances by any artist.

Yoakam – a native of Pikeville, Ky. – is currently tied with Lyle Lovett for the show’s most musical performances with 23.

Besides his appearances with Leno, Yoakam also was on “The Tonight Show Starring Johnny Carson” six times, beginning in 1986.

“Jay and I always joked about it,” Yoakam said Monday from his home in Los Angeles. “I guess Lyle and I have made a career of doing Jay’s show.”

Sometimes he was there to promote a record, sometimes a movie. Whichever, he always brought his guitar. “I figured since I was there I might as well sing.”

Some appearances stick out more than others, like the time Leno asked him to help Ellen DeGeneres put lyrics she wrote to music, impromptu. Or the time he and his late friend and mentor Buck Owens went on together to sing “Streets of Bakersfield.” Or when he flew 20 hours nonstop to entertain troops with Leno in the Middle East during the holidays.

“The great thing about everybody there is they’ve always been very willing to allow me the latitude to do what I wanted to do. I did things like ‘Back of Your Hand,’ which was a very low-key track. One time I went on with a (Latin) brass section and did ‘Silver Bells.'”

The first time he did the show, back when Carson was host, he was on with a girl who blew the world’s largest bubblegum bubble. As he recalls, he was only the second act, after ZZ Top, to perform with his own group of musicians instead of the show’s house band.

“I broke out of the clubs in LA and had a grassroots following there. I think that helped. Johnny got it right from the outset,” said Yoakam, whose many hits include “Honky Tonk Man,” ”A Thousand Miles from Nowhere” and “Fast as You.”

Leno carried on the tradition when he took over.

“Every musical act, not just us, he walks to the side of the stage and watches you. That says as much about Jay as it does the act performing.

“Jay turns a pretty good wrench, and hotrod mechanics usually have hotrod music around them when they’re working or driving. I think Jay has a great appreciation for music, and that’s allowed me the opportunity and a place to go play,” Yoakam added.

Yoakam’s latest album is “Dwight Sings Buck,” a musical tribute to his friend. When he does the show Thursday, one of the tunes he plans to perform is the Owens classic “Act Naturally.”

“Jay had a soft spot for Buck. He’d never not mentioned or asked about Buck until his passing.”