Yoga is so easy anyone can do it, instructors say 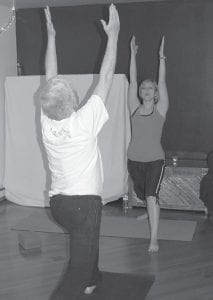 Jonathan Hootman and Heather Bates Vice both credit yoga for improving their quality of life and they want to help others experience the benefits of this exercise.

In November Hootman and Vice, who are both certifi ed yoga instructors, created North Fork Yoga.

“It has had such an impact on our lives and it is something we want to share,” said Hootman. “We’re really excited to be an active participant in the community and to be a mainstay for a long time.”

Vice said she looked to yoga as a way to guide her through childbirth as well as manage her hectic lifestyle.

“I have a lot going on and it has helped to balance everything,” said Vice.

Vice said she is able to play with her four-year-old and six-year-old daughters and not be out of breath or tired.

She also said yoga is good for improving posture.

“Yoga offers a holistic approach to health,” said Hootman. “It’s physical and can help you get into shape and lose weight. It is very relaxing. That is where the emotional benefits come in. Mind, body, spirit — it nurtures all of those.”

Hootman said once people start practicing yoga they begin to see what their bodies are capable of doing and may decide to stop unhealthy habits such as smoking cigarettes.

“You do yoga and feel good about yourself and want to take better care of yourself,” said Hootman.

At least 10 people have become dedicated to taking yoga classes under Hootman and Vice, with ages ranging from 12 to 70.

Hootman said almost anyone can participate in a yoga class.

“Anyone can do yoga,” said Hootman. “If you can breathe, you can do yoga.”

He said people have told him they can’t practice yoga because they are out of shape, but he said that is a reason to try yoga.

Teresa Collins, Vice’s mother, started practicing yoga about seven years ago and said she still does yoga for both the physical aspects and for what is gained spiritually.

“In yoga you learn to quiet your mind and strengthen your body,” said Collins. “Yoga is something I have always thought was important to do for myself.”

Collins said through yoga she has learned calmness, focus and relaxation.

“It is important to be healthy and active not only physically but spiritually and emotionally,” said Collins.

A six-week beginner’s class will begin at 6 p.m. on April 7 at the Letcher County Tourism Building.

“We go generally slow and we email people outlines detailing the poses and the health benefits,” said Hootman. “It’s kind of like a classroom environment, but we still get into the poses.”

Beginning in April most of the yoga classes will be held at the Letcher County Tourism building in downtown Whitesburg. An all levels drop-in class will be held on Mondays from 6-7:15 p.m. and on Tuesdays from 7:30–8:45 p.m.

An intermediate level class is held at 6 p.m. on Thursdays at Hootman’s residence located at 52 Easy Street in Whitesburg.