Yonts brothers go to work when visiting their parents 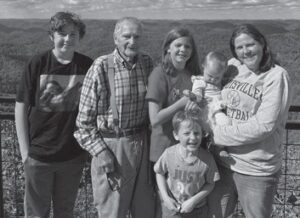 Hello everyone — I hope all had a good week. The weather has been a little cooler and it feels good. I am not thinking ahead about the four letter word that’s coming (snow). I’ve heard this week should be nice.

Hannah Harris of Louisville is engaged to Alex Harrison of Louisville. Hannah is the daughter of Laura and Mike Harris of Lexington, and the granddaughter of Bob and Ramona Caudill of Little Cowan. Congratulations to Hannah and Alex.

My brother-in-law Jeff Wenning of Coldwater, Ohio, sent me a text to let me know that he got a subscription to The Mountain Eagle. Thanks, Jeff.

On October 15, I went to a luncheon at Doris Banks’s home. Kathy LaMonte is the one who set up the lunch. Those attending were Doris Banks; Randy Brown; Carol Caudill; Kathy LaMonte; Anna Yonts; and Martha Wenning. I didn’t stay for the dominoes game as we had company. 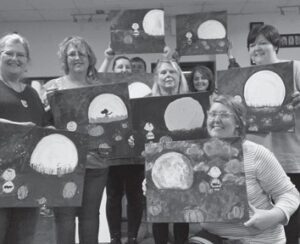 Linda Lucas of Kingsport, Tenn., visited her daughter, Beth Callahan of Mocksville, N.C. They were celebrating the birthday of Beth’s daughter, MacKenzie. Linda did spend time with her great-granddaughter Charlie.

Joe Yonts of Somerset and Roger Yonts of Dahlonega, Ga., spent the weekend with their parents, Anna and Duane Yonts of Little Cowan. Anna said the sons work when they are in.

Randy and Eula Brown of Little Cowan had their grandson, Eli Brown, for the weekend. They enjoyed their time together. 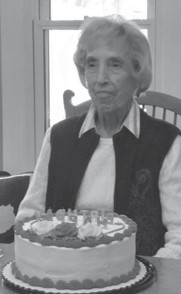 Thelma Ison of Flemingsburg celebrated her 89th birthday on October 17, 2021.

Randy spent a week at the lake. He said he watched every sunrise and every sunset. He also said the fishing was great.

Janis, Mike, Myles, Addison, Tucker, and Cami Marr came in for the weekend to see Janis’s dad, John Campbell, on their way home from fall break. They had been to Tybee Island, Ga. Along with visiting John, they visited Janis’s grandpa, Glen Brown of Whitesburg. Janis and family took Glen to the overlooks on Pine Mountain. They had some good pictures taken up there.

On Friday night we had a cookout on Town Hill. It was so nice up there. It was a half-moon night and bright. Those attending our hotdog roast were: John Campbell; Janis Marr; Mike Marr; Myles Marr; Addison Marr; Cami Marr; John Hamilton; Michaelah Hamilton; Becky Wenning; Brad Wenning; Mike Wenning; Marty Wenning; and John’s dog, Buddy. We had a wonderful time.

CAT handled having a lot of people around real well. He enjoyed having the kids play with him. He definitely got a lot of exercise.

We have a shelf that is high on the wall. It used to have framed pictures there until CAT discovered it. CAT likes to sit up there and make people nervous, especially if they aren’t used to it. We always tell CAT not to jump. When I got home on Sunday night, Mike said, “You know how you always wondered what would happen if CAT jumped?” Apparently CAT jumped off that shelf. He was kinda aimed towards the couch but landed on the floor. I expect this to become a habit for CAT.

As you may know, John, Mike, and I play a lot of Catan. Sometimes feelings (mine, LOL) get hurt but once the game is over, you’re ready for another game. Apparently, I said, “There’s no crying in Catan” when my sister was here. My sister enlisted the help from a cousin, Kristin White, and had a shirt made for me which says “There’s No Crying In CATAN”. When I opened it, I laughed until I had tears. I love the shirt.

We have a new family member. Shepherd Lee Ferris arrived on October 12, 2021. He weighed seven pounds and five ounces. Shepherd is the son of Zack and Abigail Ferris of Athens, Ala. His big brother is Abraham Ferris.

Shepherd is the grandson of Amie and Jeff Daniels of Athens, Ga. and Jeff and Joanna Schrimsher of Athens, Ga. The great-grandparents are Anna and Duane Yonts of Little Cowan.

Kathy LaMonte and I went to Flemingsburg on October 17. We went to celebrate our Aunt Thelma Ison’s 89th birthday. The party was held at the home of Debbie and Jeff Vice of Flemingsburg. Those attending were: Thelma Ison, Glennon Ison, Debbie Vice, and Jeff Vice of Flemingsburg; Jenny Stigers and Li Fu Stigers of Crestview; Susan Ware of Lexington; Kathy LaMonte of Clinton, Miss.; and Martha Wenning of Little Cowan. It was great spending time with family and celebrating Aunt Thelma’s birthday.

On Monday evening I went to a paint class at Mountain of Scraps. We painted Charlie Brown with pumpkins. Those painting were Donna Watts, MonaRae Collier, Diane Adams, Sue Banks, Hayden Adams, Tisha Reynolds, Stephanie Slone, and Martha Wenning. It was a fun time.

If you have any news please email CowanNews@aol.com. Thank you.

Have a wonderful week and stay safe.